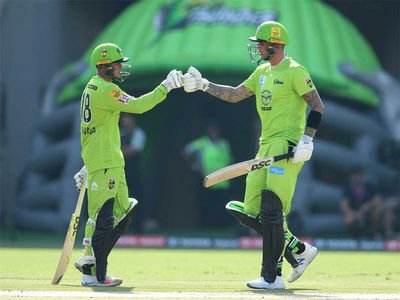 Adelaide Strikers won the toss and have opted to bowl first.

Sydney Thunder scored 43 for 2 in the powerplay. At the halfway stage, they reached 72 for 2. They have posted a total score of 151 for 7. Alex Hales was their to scoring batsman with a score of 59 in just 35 balls. Chris Morris achieved 21 in 14 deliveries. However, the other batsman failed to deliver but still, they managed to post a fighting total of 151. Peter Siddle picked two wickets.

Adelaide Strikers also started in a similar passion as they scored 42 for 2 in the powerplay. At the halfway stage, they reached 68 for 3. In 15 overs, they stand at 115 for 4. But they batted poorly in the last 5 overs as they lost 5 key wickets at that stage. Because of that, they were able to score 143 for 9 in their innings. Sydney Thunder fights back in the last 5 overs as they bowled well and they did not allow them to score runs in the end and put pressure on them by getting them out.

Jonathan Wells achieved 34 in 27 deliveries. Travis Head also batted well but he got dismissed on 32. Their other batsman failed to deliver. At least one of the top order batsmen should have stayed till the end. Daniel Sams took three wickets. Chris Morris and Jonathan Cook took two wickets as well. SYT won the game by 8 runs. Alex Hales is awarded as Player of the Match. SYT will go ahead and play with the Melbourne Stars in the Challenger after winning the knockout game.