Altroz Super Striker of IPL 2020 I Hard Hitting Batsman I

Indian Primer League has been entertaining its fans over the years. Additionally, the 13th season of IPL has been successfully ended on November 10, 2020. Mumbai Indians have emerged victorious for the 5th time. BCCI organizes a grand presentation on the finale and awards the best players of the tournaments. In the same way, BCCI has introduced “Altroz Super Striker of the Season. It is a unique award for the batsman having the best strike rate –The batsman having the best strike rate take home the attractive Tata Altroz Car.

In IPL 2020, the Mumbai Indians all-rounder Kieron Pollard bagged the title of “Altroz Super Striker of the Season.” Along with the stunning Tata Altroz Car, he received a cheque of INR 10 Lakhs. Pollard won the title having an amazing strike rate of 191.42 in a total of 12 matches. 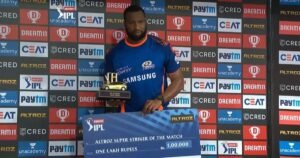 In this incredible league, the other players along with Pollard who has kept their hawk-eye on the Tata Altroz car and obviously was performing their level best to win this unique title. The next in line was:

The batsmen set a trend with their brilliant strikes in this extravaganza tournament. Indeed, IPL 2020 was a season having the class, excitement, thrill, and drama. The windless skipper, Kieron Pollard is known for his perfect power hits. However, he comes in the back of the innings to hit amazing scores and to set a defending target for the opponent.

When Pollard is at the strike, the fans always experience thrill, magic, and excitement and he always overcomes everyone’s expectations. This year, he even led Mumbai Indians when Rohit Sharma misses out on few games due to a hamstring injury.

Kieron Pollard has an incredible batting average of 53.60 in 12 innings. He smashed 268 runs and reached his strike rate to 191.42. However, his highest score of the tournament is unbeatable 60 runs. Undoubtedly, with his capability, he won himself a dazzling Altroz car sealing the title “Altroz Super Striker” in IPL 2020 under his name.