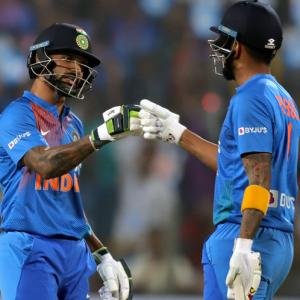 Indian cricket team has defeated Sri Lanka and won the T20 home series 2-0. Unfortunately, the first match got washed out otherwise they could have whitewashed Lankans. They beat them by 78 runs in the last match of the series which took place in Pune.

Both the Indian openers batted well as they scored the fifties. They played brilliantly because they managed to post the total score of 201 for 6. Dhawan was lucky as Dasun Shanaka missed his catch in the second over on the bowling of Angelo Mathews. But, he played well after that and managed to reach his fifty after returning from an injury.

India’s batting position in this game was unpredictable as Virat came at number six and gave the opportunity to Sanju Samson to bat at number three but he was unable to deliver. He should get a few more chances because he is a very talented player. Manish Pandey batted at number four and he plays till the end and was unbeaten on 31. Shardul played a vital inning of 22 in just 8 deliveries. Sandakan picked 3 wickets.

Sri Lanka batted badly as they lost 4 wickets in the powerplay and scored 35 runs only. Angelo Mathews and Dhananjaya de Silva played well but they could not able to do much as the target they were chasing was a big one but due to poor batting from the openers let the team down.

Dhananjaya scored 57 in 36 balls. Mathews achieved 31 in just 20 deliveries. Navdeep Saini picked three wickets. Shardul Thakur and Washington Sundar took a couple of wickets. Shardul Thakur is the Player of the Match. Navdeep Saini is the Player of the Series. Virat is delighted with the way 2020 has started for the Indian team as they won the series quite easily.