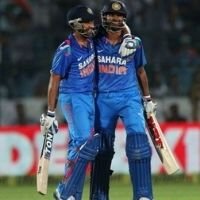 Indian opening batsman Shikhar Dhawan misses out on the New Zealand tour. He will miss the five-match T20 series and three ODI’s which will be held in New Zealand. Shikhar Dhawan injured his shoulder while diving on the field in the first innings of the series decider match. Which took place during the third and final game against Australia in Bengaluru.  He did not come out to bat in the second innings because of that. An MRI scan was conducted and it results in injury.

He will be visiting National Cricket Academy for rehabilitation and he will be out of action for a few weeks. Injuries have been a huge concern for him as he missed half of the World Cup. He returned back against West Indies and played against Bangladesh as well but he injured his knee in a domestic game. He played against Sri Lanka and Australia but in the final game, he injured his shoulder. Sanju Samson will replace him in the T20’s but in ODI’s Prithvi Shaw will replace him. Kedar Jadhav is in the squad in 50 over a game.

Shikhar’s injury will be a big blow to India as they needed the preparation for the upcoming T20 World Cup in order to get their combinations right. Their experiments were going on since the Sri Lanka series and they are trying different players in different positions. Because of injury, he might lose the spot in the playing XI when he will come back.