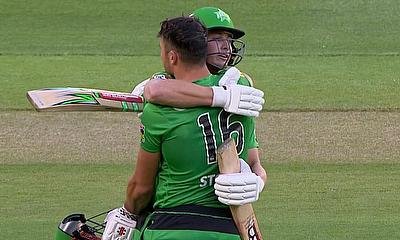 Melbourne Stars opening batsman Marcus Stoinis scored the best ever record by smashing an unbeaten score of 147 in just 79 deliveries at the MCG on January 12 on Sunday. He scored a ton from boundaries only and he hit 8 sixes and 13 fours because of which they take the team to the total score of 219.

Sydney Sixers were desperate to break a partnership but it came off too late as the damage was done already. They did not bowl well because they were unable to pick wickets. Sixers didn’t bat well because they lost too many wickets and they were never in the game. However, Moises Henriques and  Ben Dwarshuis were looking good but due to the poor start from the openers, they were unable to cover up the damage. They could score 175 runs.

Melbourne Stars won the match by 44 runs. They bowled well as Clint Hinchliffe picked three wickets in the game. He destroyed SYS middle-order batsmen because he gave only 20 in his bowling spell and took three wickets. Marcus Stoinis is the Player of the Match. He said that he enjoyed it a lot but and he didn’t know that it was the highest ever individual score. We have got a great group and we have been playing good cricket.

With this game, MLS won its eighth match and is topping the table with sixteen points. They have lost only one game out of nine games in the tournament which is brilliant. While Sydney Sixers, are on the second position just after MLS with twelve points.