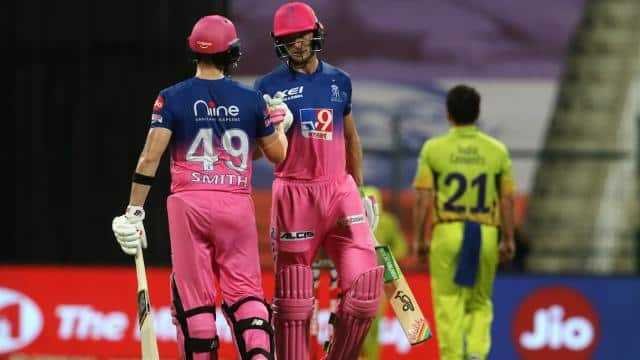 MS Dhoni played his 200th IPL Match against Rajasthan Royals. But the things didn’t go in his favor because CSK lost the match. They are now in the bottom position in the points table. Nothing is going right for them. They are struggling to score runs and were unable to pick wickets.

Chennai Super Kings scored 125 for 5 in the 20 overs. They started poorly because they lost Faf du Plessis and Shane Watson in the powerplay. Sam Curran failed to convert the start and he gave his wicket away to Shreyas Gopal while trying to hit a six. At the halfway stage, they reached 56 for 4.

MSD and Jadeja have to rebuild the inning. They added 51 runs. But, Dhoni got run out when CSK needs to accelerate the scoring rate. He played a run a ball 28. CSK’s highest scorer was Ravindra Jadeja with a score of 35 in 30 balls. Jofra Archer, Kartik Tyagi, Shreyas Gopal, and Rahul Tewatia picked a wicket each. But, there was no intent from CSK batsman to score the runs. However, Jadeja tried to hit the boundaries in the end. But, it wasn’t enough.

Shreyas Gopal and Rahul Tewatia bowled a brilliant spell as the duo gave only 32 runs in 8 overs and took two wickets. It was a brilliant bowling performance from them.

Buttler’s knock was a game-changer because Smith was struggling to score as well. But, Buttler’s aggressive knock allowed Smith to play an anchor’s role. They won the match by 7 wickets and with 2.3 overs remaining. Deepak Chahar picked a couple of wickets. Josh Hazlewood took a wicket as well. Jos Buttler receives the Player of the Match.

Deepak Chahar and Josh Hazlewood gave CSK  a chance. However, the other bowlers failed to deliver. Piyush Chawla was introduced to the attack in the 13th over. He gave 32 runs in his 3 overs.