PSL 2020 Final Match I Lahore Qalandars vs Karachi Kings I

Both the teams played the finals for the first time. Since the tournament first started in 2015 and hence, the view was spectacular. Cricket analyst Freddie Wilde described the clash as “undoubtedly the biggest match on the league’s history. By, putting Pakistan’s two major cities against each other.” The teams after beating every other team down made it to the finals and gave some cut-throat competition to each other. 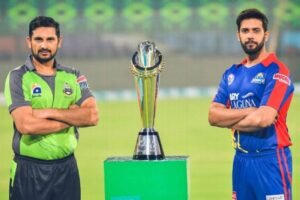 The clash between the two in the PSL 2020 Final Match

Lahore Qalandars set a target of 134 runs for the Karachi Kings. Which was chased down by Kings in 18.4 overs. Kings performance was over the top this time both in batting as well as bowling.

Babar Azam became the man of the match. After scoring an unbeaten 63 runs off 49 balls crossed the finish line with 8 balls to spare. His 5th half-century of the tournament led his team to defeat the Qalandars in the finals. Umaid Asif who gave 2 runs for 18 balls too played the starring role in the clash against the other team and the two together had made history for the Karachi Kings.

The finals between the two finally ended with Karachi Kings being crowned the champions of the PSL 2020 on 17 November 2020. Karachi Kings defeated the Lahore.