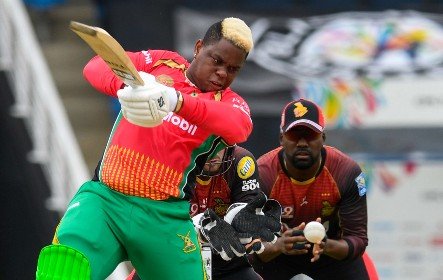 The first match of the CPL(Caribbean Premier League) was reduced to 17 overs. Because rain affected the game at the Brian Lara Stadium in Trinidad. Guyana Amazon Warriors scored 144 for 5 in 17 overs. They lost a couple of wickets early. However, Shimron Hetmyer and Ross Taylor rebuild the innings.

Shimron Hetmyer scored 63 in just 44 balls. But, he was unbeaten as well. While Ross scored 33 in 22 deliveries but he got dismissed by Sunil Narine in the 10th over. Pooran came in to bat but he was struggling to score runs. He played run a ball and got out at 18 by Searles.

In the end, Keemo Paul played a small cameo of 15 which helped them reach 144. Sunil Narine bowled a magnificent spell as he gave only 19 runs and picked a couple of wickets.

Lendl Simmons and Sunil Narine opened the innings for Trinbago Knight Riders. He played an aggressive inning of 50 runs in 28 deliveries. His strike rate was 178.57. It was his seventh T20 fifty. But, Lendl Simmons got dismissed on 17 by Naveen.

Darren Bravo played a handful inning of 27-ball 30. He ensured that they are on the winning end. Because of which they chase the total quite comfortably in the end. However, Naveen and Imran Tahir picked a couple of wickets. But, Trinbago Knight Riders won the match by four wickets.

Sunil Narine is the player of the match for his brilliant 50 and two key wickets in his bowling spell.