Dream11 Game Changer of IPL 2020 goes to Kings XI Punjab skipper KL Rahul. He has been awarded the “Game Changer Award of the season” in IPL 2020. Along with that, with his outstanding performance throughout the season, he was even awarded Dream 11 Orange Cap Award of the 13th season of the IPL.

The 28-year-old Rahul has the only stand out player for Punjab in Dream 11 IPL 2020. In just 14 innings, he scored superb 670 runs including 5 half-centuries and one century. He has an amazing temperament and the ability to score runs in any situation. Indeed, he proved his capability in the 13th season of the IPL. Rahul collected 975 Fantasy Points for his exceptional batting and wicket keeping. 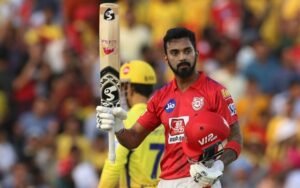 Hardik Pandya collected the trophy and cheque of INR 10 Lakhs on behalf of Rahul for winning the title of “Game Changer Award” in IPL 2020.

Since IPL 2018, Rahul has shown impeccable batsmanship and has been gaining popularity and respect. In IPL 2020, he has enhanced his popularity with his superb form and sheer class smashing amazing scores. Deservingly, Rahul acquired two Dream11 IPL Awards, “Game Changer Award of the season” and “Orange Cap Award”. Let’s look at his performance in the IPL 2020.

Rahul deserved both the awards from Game Changer Awards to the Most Valuable Player as he carried the baton of Kings XI Punjab’s batting throughout the tournament. KL Rahul had an amazing strike rate of 129.34 and an impressive average of 55.3. Rahul was the fourth batsmen who acquired the century in IPL 2020 against Royal Challengers Bangalore.

After winning the award “Dream11 Game Changer of IPL 2020″ KL Rahul thanked all the supporters and said that winning the orange cap and Game Changer Award feels nice, but it would’ve been nicer if Kings XI Punjab has gone further in the tournament. He added that he had learned a lot about being a leader this tournament”.