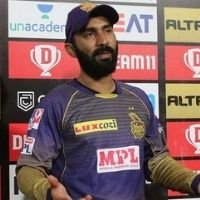 Dinesh Karthik stepped down as Kolkata Knight Riders Captain. England’s Skipper will replace him and will lead the side against Mumbai Indians. He becomes the second England player to lead the side in IPL(Indian Premier League). The first one was Kevin Pietersen.

Dinesh Karthik met Eoin Morgan and the head coaches and decided to step down and says that it will benefit the team and he wants to focus on his batting.

He was going in the correct direction with his captaincy because the team was standing in the top four positions and he did not have to step down. They have won four games out of the seven matches they have played. So, the decision was a big surprise. He has scored just 108 runs in 7 games and his batting average is 15.43. His batting average is really poor this season. So, he was looking to focus on his batting.

KKR CEO said that we are lucky to have a leader like DK who wants the best for the team. Because it requires a lot of guts to do that. But, it was not an easy decision to make. The decision was quite surprising but we respect his decision and applauded him for his leadership in the 2-3 years. Eoin Morgan agreed to lead the Kolkata Knight Riders team. He has a great experience in captaincy as he is a 2019 World Cup-winning captain.

In 2018, Dinesh Karthik was announced as the KKR captain. He replaced Gautam Gambhir. In his leadership, they reached the playoffs but got eliminated in the next round. It was a fantastic season for him. He scored 498 runs with an average of 49.8.

Why Dinesh Karthik stepped down as KKR captain?

It is said that he took the decision to lay more emphasis on his batting and improve his contribution to the team.

Who is the captain of Kolkata Knight Riders in IPL 2021?

Who is the vice-captain of Kolkata Knight Riders in IPL 2021?