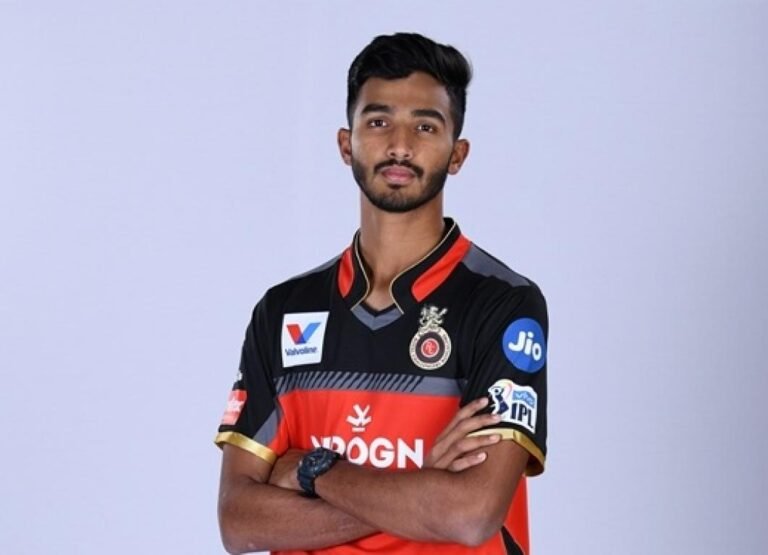 Born on 7 July 2000, Devdutt Paddikal rose to popularity after he started playing for the RCB (Royal Challengers Bangalore) in 2020 (though he was part of the team since 2019. He is perhaps one of the rising stars of Indian cricket. He also represents a team called Bellary Tuskers in the KPL (Karnataka Premier League) since 2017.

He is quite a tall cricketer, with his height measuring 6 feet 3 inches. He has played in almost all formats in domestic cricket in India. In all of them, he represents the Karnataka state team.

In 15 first-class matches, he has scored 900+ runs with an average of 34.88. He hasn’t made a century yet (he did score 99 runs once, which is his highest score), but he has made ten half-centuries playing for the Karnataka team.

His domestic T20 career has also been interesting since he has scored 1250+ runs with an average of 43.82 runs. He has also scored a century and eleven half-centuries. His T20 domestic career-best has been 122*.

His List-A format performance has been phenomenal as he has scored 650 runs in 13 matches with an average of 59.09 runs per innings. The total number of centuries here stands at two and half-centuries at five. But, his top score stands at 103*.

Although he was a part of the RCB squad since 2019, he got to play his first IPL match in the 2020 season. He made his debut on 21 September 2020 against the Sunrisers Hyderabad in Dubai, UAE.

He opened for the RCB and went on to play an exciting inning of 56 runs in 42 balls, hitting eight boundaries and maintaining a strike rate of 130+. As for the match, SRH had won the toss and had decided to field first.

RCB, thanks to Paddikal and ABD’s fabulous performance, both of whom smashed half-centuries, put up a total of 163 runs. Bhuvneshwar Kumar was the most successful SRH bowler with a wicket to his name and was also the most economical one.

SRH did a brave chase but fell short by ten runs. Their wicket-keeper batsman made a valuable contribution of 61 runs.

He won the IPL Emerging Player Award for his performance in the 2020 edition of the league.