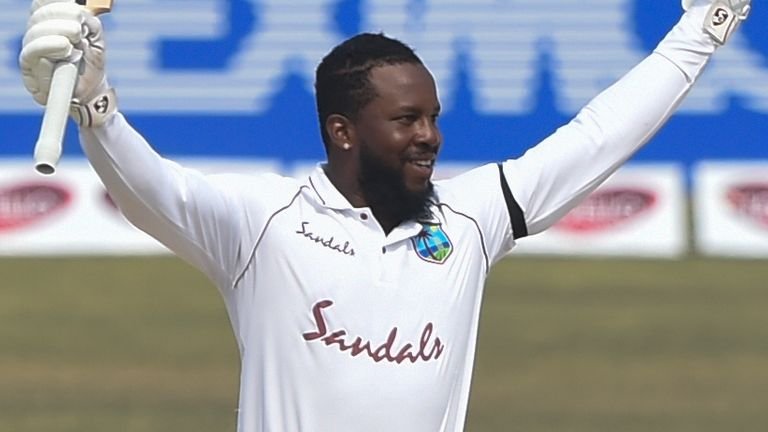 Kyle Mayers aka Kyle Rico Mayers is a batting all-rounder who was born on 8th September 1992 in Barbados. Incidentally, his father Shirley Clarke was also a cricketer but unfortunately didn’t make it to international cricket. He did coach Kyle though and Kyle made his dream come true. An interesting fact about Kyle is that while he is a left-handed batsman, he bowls with his right hand. He has represented several teams in his career as a cricketer and some of them are as follows.

As you can probably see, he is playing cricket since 2011. Now let us discuss his domestic career in cricket. It is important to do so to understand how he has evolved as a cricketer. He made his T20I debut in 2020 and ODI and test debut in 2021 which we will talk about later.

In this section, we are going to discuss his domestic career. Let’s begin.

In total, he has played 33 first-class matches in which he has scored 1650+ runs with an average of 33.36. His topmost score is 210 not out. While he has smashed 3 centuries and 12 half-centuries. As for his bowling, he took 72 wickets in these matches. He has taken five wickets in an innings three time while his best bowling statistic is 6/29.

He played 59 List-A matches with the total number of runs scored being 1100+. His average is these matches is 26.92 which isn’t that impressive. While he has a top score of 113 runs and has successfully hit a century and four half-centuries. He has also taken 69 with the best bowling performance of 4/15.

He made his test cricket debut on 3rd February 2021 against the Bangladesh cricket team in Chittagong, Bangladesh. When Bangladesh batted first, he was the most economical bowler while he wasn’t able to take a wicket.

He made 40 runs in his first inning while hitting 7 fours. In the second inning of Bangladesh, he bowled just 1 over and have 11 runs. In his second innings, he scored a double century (210 runs) and stayed not out and faced 310 balls while hitting 20 boundaries and 7 sixes. He helped West Indies chase a mammoth target of 395 runs which was set by the Bangladesh cricket team.

It was quite a close win for West Indies as there were only 15 balls left when they reached the set target. Kyle’s debut for him was a dream debut and he contributed a lot to his team’s win.

His ODI debut too happened against the Bangladesh team on 20th January 2021. West Indies was batting first and Kyle was the highest scorer who scored 40 runs. It was because of him that the West Indians managed to put up a respectable total. He hit 4 fours and a six in total while maintaining a strike rate of 71.43. As for bowling, he wasn’t given a chance to bowl.

The Bangladeshis had won the toss and had decided to bowl first. Their choice turned out great as their bowlers decimated the West Indian batting line up and dismissed the whole team on the total of 122. The West Indians suffered because they lost wickets at a regular interval.

His debut in the T20 format on the international level took place on 29th November 2020 against the Kiwis. He contributed 20 runs which he made in just 14 balls with a strike rate of 140+. As for his bowling, he bowled an over and gave 10 runs away.

Coming back to the match itself, West Indies had won the toss and had decided to field first. Their decision backfired as the Kiwis ended up scoring a humungous score of 238. One of their batsmen, Glenn Phillips even managed to score a century (108 runs) with a tremendous strike rate of 200 plus.

The West Indies team tried its best but only managed to put up a total of 166 runs. The reason for them losing the match was that not one of their players managed to play a big inning or stabilize the whole innings. Still, it was a decent debut for Mayers.

What is the full name of Kyle Mayers?

What is the name of Kyle Mayer’s father?