Most Valuable Player of IPL 2020 I Top Performer I

The Barbadian cricketer has shown some real game this season not only as a bowler but as a batsman as well. Even though Rajasthan Royals couldn’t make it to the finals, it’s one of the finest white-ball cricketer Jofra Archer won the trophy of the Most Valuable Player.

The 2020 Indian Premier League finally wrapped up on 10th November in 2020 with Mumbai Indians taking the winning trophy home. During the thrilling action of cricket for over 2 months, one man who has become the star of the league is Jofra Archer. That is the reason he is rewarded as the Most Valuable Player of IPL 2020.

Throughout the series, he has stunned everyone with his consistent bowling especially during the power play. Sometimes, he single-handedly managed to keep Rajasthan Royals in the game. 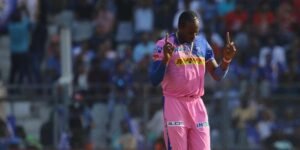 The right – arm scalped 20 wickets in 14 outings. With the highest percentage of dot balls in this league in UAE. While other bowlers were struggling. He with his fast pace, bounce, and variations managed to give some serious troubles to the batsman. Not to forget how he cleaned up Chris Gayle at 99 in the last over of Kings XI Punjab.

Coach of Rajasthan Royals, Andrew Mc Donald says “We probably had too few contributors around him. Kartik Tyagi was a great find, a young under-19 bowler, we weren’t sure if he could take that big leap but he showed us he could, he held his nerve in critical moments and bowled some good death overs. He is only going to get better,” proving that it was a one-man show for Rajasthan Royals.

His cameos with the willows also helped him amass 305 MVP points. He slammed some 5 boundaries and 10 sixes. He scored 113 runs at a strike rate of 179.36 and showed everyone his all-around game. Jofra proved why he is considered one of the finest bowlers in limited over cricket. He dominated the IPL 2020 and certainly is worthy of winning the award of Most Valuable Player.