Sunrisers Hyderabad is a famous team of the Indian Premier League. Every year it bestows charismatic performance and leaves a concrete whack in the IPL season. Sunrisers Hyderabad is owned by Kalanithi Maran of the prominent SUN Group, and that is why the team is also named Sunrisers. The team made its debut quite late after the establishment of IPL in India, that is, in 2012.

Sunrisers Hyderabad, as the name suggests, represents Hyderabad of Telangana. This team came into existence when Deccan Chargers, which initially represented Hyderabad, got into some trouble and were eliminated from IPL. David Warner is currently the captain of this prominent team. Trevor Bayliss is the team coach, and Tom Moody is the head coach and mentor of this terrific team. 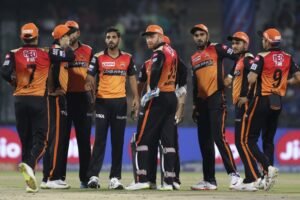 Other distinguished team players include Shikhar Dhawan, KL Rahul, Yusuf Pathan, Jason Holder, Vijay Shankar, and Martin Guptil. These players are the reason why this team is one of the star performers in IPL territory. They add more grace and vitality to the team with their impeccable performances. David Warner is the most proficient batsman on the team. He has also amassed three orange caps for his stunning performances. Bhuvneshwar Kumar is the star bowler of the team, and with his magnetic bowling skills, he adds more energy to the team.