Cricket in India has had quite an interesting journey. Introduced by the colonial British, the game has evolved to an extent that it has become a passion for the youth of our country. Today, cricket is a fan favorite game of millions of Indians. Today we will be discussing the Indian cricket team as a whole.

The first match played by the Indians as a team was in 1932 at Lord’s in England. But they managed to secure their first victory two decades later in the year 1952. The team was quite initially at the international cricketing scene but started to gain strength after the arrival of players like Kapil Dev, Vishwanath, Gavaskar.

As a crucial observation, Team India has been far more successful at winning matches at home in India than in foreign countries. It has managed to win the cricket world cup twice (1931 under the captaincy of Kapil Dev and 2011 under the captaincy of MS Dhoni). Besides this, the team has also managed to win the T20 world cup in 2007 and the ICC champions trophy in 2013.

Virat Kohli, veteran batsman, and cricketer is the current skipper of the team. He has managed to lead the entire team through difficult times. The future looks quite bright for the team. 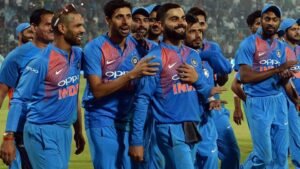 Virat Kohli is the current skipper of the Indian cricket team. Besides being a terrific batsman, Virat has also been the most successful test cricket captain.

Only 33 players have served as the captain of the test team while 24 of the ODI squad to date. While many argue that Kohli hasn’t led the team win any major ICC trophy and has issues with his temper on ground, his statistics tell a different story.

Another distinction that he has achieved is that of be leading the team in maximum number of test games besides scoring maximum hundreds as the captain.

You would be surprised to know that his batting average is over 60 while acting as the test skipper.

In all probability, he has a chance to become the best team leader Indian cricket has seen till now. In ODI format too, his batting performance has been par excellence with him being behind just Ricky Ponting when it comes to scoring centuries as skipper.

Rohit Sharma has been playing the role of vice-captain since 2019. A point to note about him is that while he made his test debut in 2013 but to date has played 38 tests only.

He was made the test vice-captain after he improved his form and cemented his place in the team in 2019. He is indeed a great complimentary leader for the team given his excellent track record as the captain of Mumbai Indians. Many troll him for his fitness but it is a fact that he is one of the best limited overs Indian player and even Virat Kohli has praised him time and again for the same.

The names of the skippers in various formats of cricket have been listed chronologically. Their representation as a captain may overlap with the tenures of others in the list as well.

Indian cricket team has a great future and we hope for the best for the entire team. Let’s hope that they keep entertaining people and make India proud.