What is a concussion?

A concussion is specifically a type of brain injury. It is one of the most severe types of brain injuries as it can even lead to death. This injury comes under the tag of severe brain disease. Because it can temporarily block the brain’s ability to function normally. A vigorous shaking of the head or a fast blow to the head can lead to a concussion. It is not very hazardous, but it does require proper care, testing, and treatment. If trauma is ignored or handled with carelessness, then it can impair the brain for the long-term. The occurrence of concussion in cricket is there when a batsman gets hit on the helmet. It can lead to a concussion. Common Symptoms of a concussion

The common symptoms of concussion include severe to mild rates of headache. It also paves the way for disturbed coordination of the brain and confusion. It can also give rise to extreme instances of nausea, fatigue, and uneasiness. Sleep patterns can become very disturbing during this injury as the brain loses the capability to sleep effectively. The most alarming symptom of this injury is depression, as it torments the sufferer’s body to a core.

In cricket, a concussion can occur quite frequently as it is a very vigorous game. Neglecting the symptoms of trauma can be even more fatal. Because it can dig the possibilities of a terrible shock to the neurological system. The International Cricket Council has issued specific guidelines about this injury. It stated that concussion is quite detrimental for the player’s health. And, it should not be dealt with laxity at any cause.

ICC has set protocols for managing players with an episode of concussion during matches. And, it also monitors the players at risk of trauma. A myriad of grade return and testing has been laid in the same direction. It is one of the most terrible injuries. Dealing with it with perfect management is imperative; otherwise, the consequences can be brutal.

A concussion is an extreme head injury condition. When the player’s head or neck suffers from a fast jerk, hit, or blow. The cricket authorities have set some standard procedures and regulations to manage concussion cases. The concussion substitute rule or concussion replacement rule is issued by the International Cricket Council (ICC). This rule came into existence in August 2019.

If a player is found to be a concussion patient or is suffering from its significant indications, then a substitute can play the match in place of him. It is a category of like for like a replacement. If the referee of the game approves the substitution after having a keen and proper inspection. Then, the substitute player can play in place for him.

Cricket is a very energetic sport, and the probability of a player getting hurt in it is relatively high. A concussion is a very frequently occurring injury in the sports realm and primarily in the cricket’s domain. A batsman is more prone to trauma pertinent accidents as he faces the jerk of the ball straight. When a ball hits the player’s head or neck with very high momentum, then the player can get a severe injury commonly called a concussion.

It can further aggravate bothersome symptoms in the player’s body like dizziness, depression, chronic to acute headache, nausea, restlessness. To combat and reduce the consequence of a concussion, ICC initiated a concussion substitute rule. The concussion substitute rule is quite an essential ordinance as it safeguards the wellbeing of the athletes. If a player has a concussion or is the suspect of suffering it after getting injured on the field, he needs a proper care regime, rest, and treatments.

Although a concussion is not a life-threatening injury over time, it can become chronic and severe. Concussion cases must be dealt with utmost diligence and proper medications to withstand its adverse effects.

Is There a Loop Hole in Concussion Substitute Rule?

There was a huge controversy about India being given the concussion substitute in the form of Yuzvendra Chahal for Ravindra Jadeja.

Jadeja was hit on the helmet with the ball. But, he also had some hamstring issues. The Australian coach Justin Langer was not at all happy with the match referee’s decision. He wasn’t happy when the referee allows India a concussion substitute. Is There a Loop Hole in Concussion Substitute Rule?

Veteran Indian spinner and ex-International cricketer Pragyan Ojha stated that he could understand why the Australians were unhappy. But, India was well within its limits for asking for a concussion substitute. 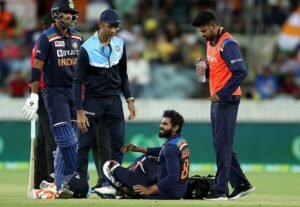 As per him, “Rules of all kinds have a loophole. However, this one goes in favor of the Indians.” His argument was that even though the ball had hit Jadeja on his helmet. But, he continues to bat. So the point of giving a concussion substitute for that sole reason alone is quite indigestible.

Overall, we can for sure say that it was a controversial move on the part of the match referee and the Indian cricket team. Another veteran Indian player Sanjay Manjrekar says that although India was given a concussion substitute in the form of Y. Chahal, it will be alright if the ICC looks into the rules once again so that one team does not end up getting undue advantage of the rule.

Overall, the whole incident attracted mixed reactions and some people supported and opposed India’s decision. We hope that the ICC comes in clarifies the rule once and for all.

If you would like to know about our verdict about the question “Is There a Loop Hole in Concussion Substitute Rule?” Then it does seem that there is some sort of a loophole that the Indians have taken advantage of while being in the game. While ICC needs to further clarify the rules related to the concussion substitute practice.

We hope that you liked this article. If you did, please don’t forget to share us with your friends and family. Stay connected for all things cricket.