Who is Deepak Hooda?

Deepak Hooda aka Deepak Jagbir Hooda is an Indian cricketer who was born on 19th April 1995 in Rohtak, Haryana. While he is actually from Haryana, he plays domestic cricket for the Baroda cricket team.

A right-handed batsman, Hooda started playing cricket when he was studying in his school. He used to be a wicket-keeper as well back then. He also played for his school which was a Kendriya Vidhyalaya when he was just fourteen.

Deepak is yet to play for the Indian cricket team at an international level. Although, he was selected in the team in a series against Sri Lanka. Hopefully, he will represent India soon.

He has also played 54 List A matches while scoring 1864 runs in them with an average of 43.34. His top score in this format is 161 and he has successfully smashed 3 centuries and 11 half-centuries in total.

Overall, he is a decent batsman but he needs to improve his bowling. 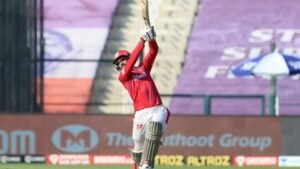 Hooda made his IPL debut on 10th April 2015 against Kings XI Punjab. As for his batting, he managed to score a decent score of 30 runs in just 15 deliveries smashing four and three sixes. His strike rate 200 in this innings. As for bowling, then he wasn’t given a chance to bowl.

As for the match, the Kings had won the toss had decided to bowl first. Their decision did not benefit them much as the Rajasthan Royals went on to put up a strong score of 162 runs. The star scorers of their team were James Faulkner (46 runs) and Steven Smith (33 runs).

As for the Kings XI Punjab’s chase to the set target of 163, they fell short of it and managed to score just 136 notches in total. Their top scorers were Murali Vijay (37 runs), Axar Patel (24 runs), and George Bailey (24 runs).

He was recently in news in the news because he alleged that while practicing for the Syed Mushtaq Ali Trophy, Krunal Pandya tried to verbally abuse and threaten him. The situation got so serious that Deepak went on to leave the team hotel and left the team.

He emailed his decision to the Baroda cricket team management. As per him, Pandya insulted him in front of the entire team and tried to suppress him as a player. While his allegations might have some truth to them, the Baroda cricket association has decided to take action against Hooda.

The CEO of BCA (Baroda Cricket Association) has sent Hooda an email informing him that strict action will be taken against him since he held himself above the entire Baroda cricket team. He also wrote that by giving the media only his side of the story, Hooda seems to be seeking out unwarranted publicity.

Hopefully, the issue will be resolved without any negative consequences.