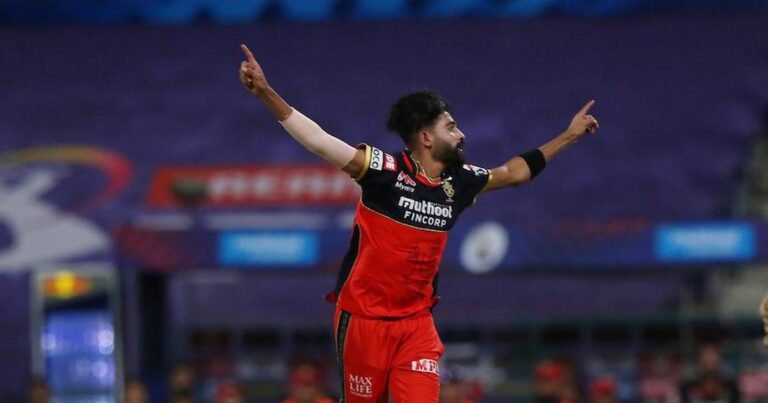 Mohammed Siraj becomes the first bowler to bowl two maiden overs in the IPL match. He created IPL history. He dismissed Rahul Tripathi and Nitish Rana in his first over. In his second over, he dismissed Tom Banton as well. But, where people say that cricket has now become a batsman’s game. He came out and bowled two-wicket maiden overs. It is unbelievable. The first one was a double-wicket maiden and the second one was a wicket maiden.

As per the plans, Washing Sundar was supposed to bowl that over. However, After the first over of Chris Morris, Virat felt that the ball is swinging. So, he gave them over to Mohammed Siraj instead of Sundar, and the rest is the history. Kolkata Knight Riders were in huge trouble because they lost their first four batsmen in the powerplay with a score of 17 runs.

The pressure is now again on the middle-order batsman Eoin Morgan and Dinesh Karthik. But, they failed to deliver. Yuzvendra Chahal dismissed Dinesh Karthik on a googly. It is not easy to score runs when you are four-wicket down. It put huge pressure on the middle order. They scored 84 for 8 in 20 overs. Eoin Morgan was their top-scoring batsman with a score of 30 in 34 balls. Lockie Ferguson scored 19*in 16 balls. Kuldeep contributed 12 runs in 19 deliveries. Mohammed Siraj took three wickets. Yuzvendra Chahal picked a couple of wickets. Washington Sundar and Navdeep Saini took a wicket each.

RCB chase the total quite easily in 13.3 overs. They won the match by 8 wickets. Devdutt Padikkal scored 25 runs in just 25 balls. He was playing well but he got run out. Lockie Ferguson dismissed Aaron Finch on 16. He came to bowl in the 7th over. But, he bowled brilliantly. If KKR introduced him earlier then it might be possible that RCB lost a couple of wickets more. But, it didn’t happen.

However, Gurkeerat Singh gets an opportunity to bat up the order. He came on Virat’s position because Virat wants to give him the opportunity to bat which could be helpful in the upcoming matches. Gurkeerat was unbeaten on 21 and Virat was unbeaten on 18.  The best moment was when RCB needed 1 run to win and Virat Kohli ran two runs. That was the moment of the day. Mohammed Siraj receives the Player of the Match award.