Guard of Honour is awarded to a player who has accomplished exceptional achievement in the sports arena. The honour is mostly given when a player plays his final match. It is received by predominantly a batsman who has attained a significant milestone in cricket. Guard of Honour is given to those players who have beaten a world record in their gaming career. While providing the guard of honour, players formulate a tunnel-like shape by coming together and honours the retiring player. The praise is rewarded on the player’s last match to make it even more memorable and unique. Guard of Honour is an integral aspect of cricket. It makes cricketers feel proud of their achievements and the distance they have transverse in cricket’s history. 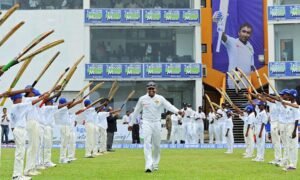 One of the best guards of honour in cricket’s history is received by Sachin Tendulkar. West Indies gave the player the praise to mark his phenomenal contribution in the cricket arena. The God of Cricket got the distinguished honour in his last test innings. Sachin is the most renowned player in cricket avenues, and the distinction is a mere feat of his wondrous achievements. Brian Lara is undoubtedly the most successful player ever. He established a remarkable feat of setting the highest individual score ever in test format. He received a guard of honour for the same achievement.

Jacques Kallis was greeted with a guard of honour from the Indian Cricket team in his last test match. The spin master and the greatest bowler of all the times, Muttiah Muralidharan received an iconic honour in his final test match. Many other prominent players, including Inzamam ul Haq, Justin Langer, Ricky Ponting, Anil Kumble, have received the guard of honour. Not only retiring players get the guard of honours. Players who beat any world record established in cricket’s history also obtain it. Recently only the most versatile player of the Indian team, Yuvraj Singh, received a guard of honour at the last match of the Road Safety World Series.

Guard of Honour is not just a moment of pride also it is emotional and heartwarming too. Some players come across nostalgia during the moment, whereas some feel immense happiness. The guard of honour’s format is celebrated not just in India but in all other countries too. Guard of Honour adds more grace and elemental form to the concept of cricket.