Why Are Jersey Numbers Important?

Ask any MSD fan about his jersey number and all of them (yes, 100% of them) will give 7 as their answer. Dhoni even has a brand named after his jersey number. Anyway, we hope that you comprehend the importance of these numbers. Now, let’s take a walk in the past regarding the history of How Do Cricketers Get Their Numbers.

Procedure For Allotting Numbers To Cricketers

There are no set rules by the ICC regarding this matter. Hence, players choose their numbers though they make sure that theirs doesn’t match with any other player in their squad. 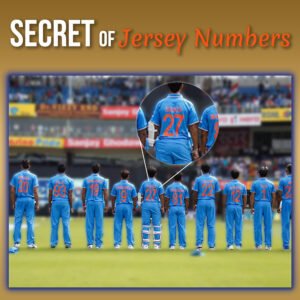 As you can see, these numbers have a story of their own. So, next time you want to know more about a player, do try to find out why he has chosen the given jersey number for himself. Some like Virat’s are about remembering and staying connected with one’s roots.

What are the ICC guidelines for choosing numbers for players?

There are no set guidelines by the council when it comes to this issue.