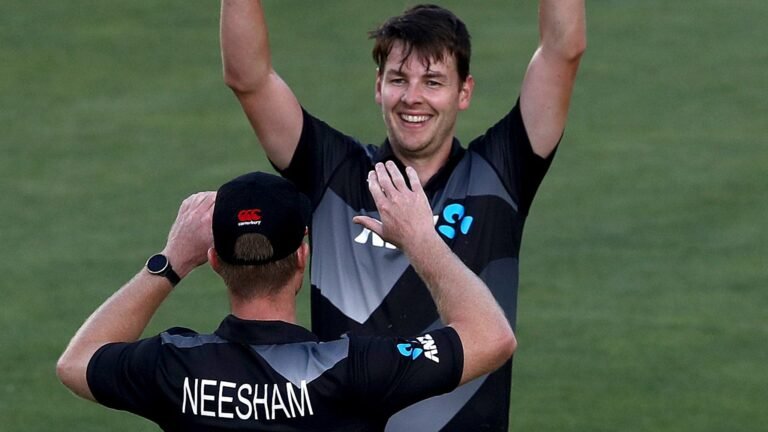 The Kiwi bowler Jacob Duffy made a dream debut against Pakistan. Because he managed to take 4 wickets after giving just 33 runs. He hails from Southland and is an amazing bowler. It was thanks to his amazing bowling that the Kiwis were able to win their first T20 match against Pakistan.

Born in 1994, Jacob Duffy had made his first-class debut while playing for the Otago Volts in the HRV Cup tournament. His international debut took place against Pakistan as we mentioned before. Some of his first-class cricket achievements include being the lead wicket-taker for the Otago Volts with 29 wickets to his credit in the 2018-2019 season. Although he has performed well for the Kiwi team in his first match against Pakistan, he won’t be able to play the remaining matches as his teammates Kyle Jamieson and Tim Southee would be joining the team. He might be given a chance to represent New Zealand in international cricket at a later point in time.

Although he did perform very well in his first match, he also had a comparatively higher economy rate (8.25). He might have to work on this issue when he is again given the chance to represent the New Zealand cricket team.

Meanwhile, he was also applauded by the Pakistani skipper Shadab Khan who referred to him as ‘very good’. We consider him quite lucky to have been given a chance to represent his national team. Also, it’s commendable that he made good use of that opportunity.

Most youngsters fail to make a mark when given an opportunity but Jacob Duffy proved himself to be an exception. We hope that we are able to see more of this excellent bowler in the upcoming series and matches.

Hope you liked this article about the young Kiwi player, Jacob Duffy. If you did, don’t forget to share this article with your friends and family. Stay connected for more cricket related updates and news.