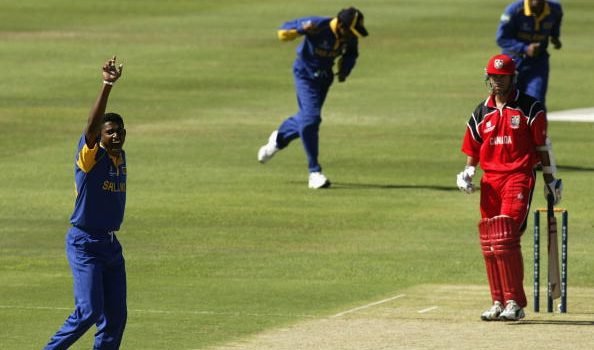 If we talk about the match, it took place on 25th April 2004 in Harare, Zimbabwe. The Sri Lankan cricket team had won the toss and they decided to bowl first. This turned out to be great for the Lankans. You might be wondering, why? This was because Zimbabwe was able to score just 35 runs. It is the lowest score in ODI in cricket history. Not even a SINGLE player of Zimbabwe cricket managed to score runs in double digits. Four of their batsmen got out without scoring a single run! (Tinashe Panyangara, Prosper Utseya, Elton Chigumbura, and Tatenda Taibu).

Coincidentally, another four of their other batsmen got out after scoring just four runs (Douglas Hondo, Vusi Sibanda, Brendan Taylor, and Stuart Matsikenyeri). As for the boundaries and sixes, only three boundaries were scored, and the Zimbabwe cricket team‘s batsmen smashed no sixes.

If we talk about the Lankan bowling, then Chaminda Vaas led the attack by taking four wickets in nine overs that he bowled. Out of these nine overs, 4 were maiden! And he just gave 11 runs in total.

Farveez Maharoof took three wickets to his credit in the three over which he bowled. In total, he just gave away three runs while also successfully bowling a maiden over. The batting of th Sri Lankan cricket team managed to chase the set target in just 9.2 overs. They did lose a wicket while doing so (Russel Arnold, six runs).

Another main highlight of this match was that Chaminda Vaas managed to take his 300th wicket. He was also declared as the Man of the Match for his excellent performance. This match was a sad incident for the Zimbabwe cricket team. Matches like these prove that having an excellent bowling attack is very helpful while you are playing cricket.