Pakistan Premier League is all set to start on 20th February 2021 with the first match to be held between Quetta Gladiators and Karachi Kings at the National Stadium in Karachi. PSL 2021 is going to be the sixth season of the franchise since its inception and like always, it will be managed by the PCB (Pakistan Cricket Board). 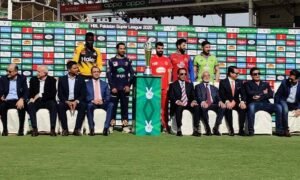 Since the coronavirus pandemic is still gripping the world, the PCB has decided to allow only 20 per cent of the maximum capacity of grounds to be filled with spectators. While this is somewhat bad news, it has to be done to avoid the spread of the deadly virus.

The teams which will be playing are the same six ones which competed in the last edition of the league. They are (ranking in this list is unordered and has nothing to do with individual team’s performance)-

They will all be playing thirty-four matches in total before the finalists meet for a final fight on 22nd March at 19:30 (Pakistan Standard Time) in the well-known Gaddafi Stadium. For sure, it is going to be an exciting journey and it will be also worth it to watch it.

For those fans who can’t go to the stadiums because of the Covid-19 restrictions, there is no need to worry since the matches are going to be telecasted on TV as well. Do enjoy them and stay safe in this time of the pandemic.

Past Winners of PSL

PSL was introduced in 2016 and since its inception, the team which has won the maximum number of titles has been Islamabad United (two times). The current holder of the championship is the Karachi Kings. Peshawar Zalmi and Quetta Gladiators both have won the title once each. Who do you think has the maximum chance of winning the league this year? Drop your suggestions in the comments section.

The PSL schedule from the first match to the last game is as follows.

The start date for PSL as we mentioned before is 20th February 2021. The champions Karachi Kings are going to be facing the Quetta Gladiators. It is going to be an exciting game for sure as both teams have won PSL once. Hopefully, fans will get to see some competitive cricket action.

The PCB after conducting an emergency meeting with the management of the PSL franchises has decided to postpone PSL 2021 for now. The reason as many of you might have possibly guessed is a Covid-19 outbreak.

Around 7 people received the test results for the coronavirus to be positive. Out of these 7, six were players. This prompted the organizers to cancel the remaining part of the PSL.

The problem was that these infections weren’t just limited to a single team. But they were spread out to several teams. Now, the drama hasn’t ended just here. Because PCB is now trying to blame the players and franchises and vice versa.

Whosoever’s fault it may have been, cricket in Pakistan has suffered as a result. The most logical explanation for what has happened is that either the players or the hotel staff breached bio-bubble isolation protocols.

PCB’s priority now would be to make sure that the overseas players who came to Pakistan to play cricket can safely return to their home countries and those who have gotten infected receive proper medical attention.

This is going to affect the economy of Pakistan as well. Because millions of rupees which people had committed for marketing, for buying broadcasting rights will now be sitting ducks. Given the fact that Covid-19 is already taking a toll, this would further send them in a downward economic spiral.

Dale Steyn Gets Trolled As Expected

A few days back Dale Steyn had made a statement that playing in PSL is far more rewarding than playing in IPL. As we all had expected, he was trolled left, right and centre by netizens. Who created a meme feast out of the whole situation. It should be noted that Dale Steyn plays for RCB in the IPL.