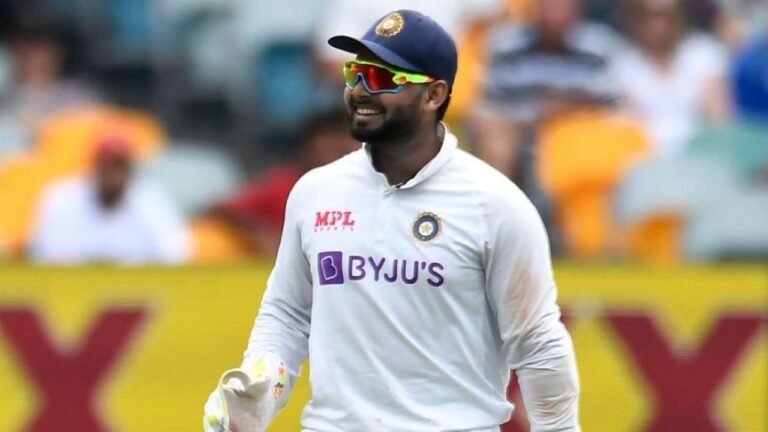 Rishabh Pant is in the news for the role which he played in India managing to win the Border Gavaskar Trophy in 2020-2021. Rishabh Pant was born on 4th of October 1997 in Roorkee in Uttarakhand. His complete name is Rishabh Rajendra Pant.

Although he used to live in Roorkee as a child. But, he would frequently come to New Delhi to get cricket coaching from his coach.  He had his own struggles as a youngster because of his middle-class background.

His big break came in his life when he was given a chance to represent Delhi in U-19 cricket against the team of Assam. He scored 35 runs in his first innings. But, then he stunned everyone by smashing a brilliant knock of 150 runs in his second innings.

He made a decent debut overall if we talk about his overall performance. In total, he has played 40 first-class cricket matches while scoring 2940 runs. His batting average in these games has been a stunning 50.68. He has managed to make 7 centuries and 12 half-centuries.

You would be also surprised to know that his topmost score in first-class cricket is 308 runs. That he made in the Ranji Trophy season of 2016-2017. He once also scored a hundred in just 48 balls in the same Ranji season.

While his List A debut came in on 23rd December 2015 as a part of the prestigious Vijay Hazare Trophy against the Jharkhand team. He scored 24 runs in this match as an opener. He is a youngster with a lot of cricket left in him.

On 18th of August 2018, Rishabh Pant made his test debut against the England cricket team. If we talk about his performance, he scored 24 runs in the first innings while facing 51 deliveries. He hit two fours and a six in that inning.

While in the second innings, he got out after scoring just a run after facing six balls. Overall, it wasn’t a debut, which even he would have been expecting. Anyway, if we talk about the match, then England had won the toss and had decided to bowl first.

Rishabh Pant made his ODI debut on 21st of October, 2018 against the West Indies cricket team. As for his performance, he didn’t get a chance to bat. With regards to the match, India had won the toss and had decided to field first.

The West Indians managed to score 322 runs in total in their innings. Opener Kieran Powell (51 runs in 39 bowls) and middle-order batsman Shimron Hetmyer (106 runs in 78 bowls) were the top scorers who propelled their team’s innings towards such a great score.

As for the Indian bowling attack, Yuzvendra Chahal took the highest number of wickets (3) while also managing to become the most economical bowler. As for the Indian batting, then they managed to chase the set target in just 42.1 overs only.

Rishabh Pant made his T20 debut on February 1st, 2017 against the England cricket team. Pant made 5* runs in total after facing 3 balls while hitting one four. He could not bat more as the innings of team India got over.

As for the match, it was held in Chennai in which the English won the toss and decided to field first. Their decision didn’t turn out to be well as the Indians went on to score 202 runs in total.

Their top scorers were Suresh Raina (63 runs in 45 balls) and wicketkeeper-batsman MS Dhoni (56 runs in 36 balls). The Indians managed to score such a high score because the England bowling attack failed to take some crucial Indian wickets.

The English in response managed to score just 127 runs as their batting order collapsed besides their top order batsmen. Joe Root (42) and Eoin Morgan (40) were their top-scoring players.

Rishabh Pant made his IPL debut on 27th of April, 2016, against the Gujarat Lions while playing for the Delhi Daredevils Team. He could score just 20 runs in 17 balls while hitting 2 fours. He without a doubt could have performed better had he not been dismissed early on by James Faulkner.

Delhi had won the toss and decided to field first. This decision didn’t turn out to be well as their opponent team Gujarat Lions scored an above-average total of 172 runs. Their openers (Dwayne Smith 53 runs and Brendon McCullum 60 runs) were the top scorers.

Imran Tahir was the most successful bowler with 3 key wickets. While surprisingly, Delhi managed to score 171 runs and hence they lost by a run. Their top scorers were Jean-Paul Duminy (48 runs) and Chris Morris (82 runs). Delhi tried their best but they lost by just one run.

Isha Negi is the name of Rishabh Pant’s girlfriend, and their relationship started in 2019. She is an independent modern girl who has a verified Instagram account (@ishanegi) with a total follower count of 155 thousand. She is also quite famous for wearing stylish and fancy clothes.

Only time will tell how this relationship will go for Pant. She is an interior designer and social media influencer by profession. Born on 20th February 1997, she is just 24 years old.

She is also fond of applying fancy make-up. Her height is approximately 5 feet 3 inches. Fans of the couple want to see them together forever.

It is also rumoured that Pant dated Rautela too in the past, and things didn’t go well. They ended up cutting off each other. Rautela also allegedly was once with Hardik Pandya, who then went on to marry Natasha Stankovic.

While Pant Is currently in the news for playing a decisive role in India’s win at Gabba, he was also involved in a funny sledging incident with Australian player Matthew Wade. What Pant would do is start to giggle whenever Wade would miss a ball while batting.

This made Wade somewhat angry, too, and he retorted back by saying that, “Are you laughing at yourself after looking at the big screen?” but Pant replied nothing to this retort and kept doing what he was doing before.

Pant is known to be a jolly and committed cricketer. His antics behind the stump aren’t a new thing. His fans must be knowing that he was involved in another similar incident with Tim Paine a few years back when Pant had called him a ‘temporary captain’ of the Australian cricket team. While Paine had tried to get back at Rishabh by asking him to babysit his kids.

Rishabh Pant’s video clip singing the ‘spiderman spiderman’ song at Gabba went viral on social media sites. The clip got such attention that even Amazon Prime India joined in the fun with a tweet. His fans and other cricket enthusiasts are starting creating memes like anything.

Some even went to the extent of trolling him and the Australian cricket players. Overall, it was one hell of a moment that Pant gave to all of us. Those of you who don’t know what the song is about is a Hindi parody song based on Spiderman.

Pant’s antics behind the stumps as a wicketkeeper are a never-ending phenomenon. But the good thing about them is that he tries to have mostly innocent fun and make others laugh. This quality of his is another reason why his fans love him a lot besides his performance on the field.

Rishabh Pant’s Comments Behind the Stumps