What is a Soft Signal?

When an on-field umpire has to make a decision whether a batsman is out or not out before referring to the third umpire is known as a soft signal.

Should the Soft Signal rule be removed?

The rule of the soft signal was implemented in order to figure out whether the catch has been taken correctly or not. Because replays were not that effective. That is the reason new technologies got introduced.

The flaw of this rule came into the picture when the on-field umpire decides to give out to Suryakumar Yadav as a soft signal in India vs England 4th T20. The rule seems to be quite poor because when the third umpire can’t figure out after watching the video footage multiple times whether it was out or not out as there was no conclusive evidence. Then, how the on-field umpire can take the decision within seconds. Why is there a hurry to make a decision? Why can’t the umpire say that I don’t know what happened there? As there was no conclusive evidence, the third umpire calls it out because the on-field umpire has given out.

We can’t blame the on-field umpire or the third umpire because they were going with rules laid by the ICC. So, ICC needs to figure this out and must change the rules. Because these kinds of incidents can hurt a lot in the crucial stage. 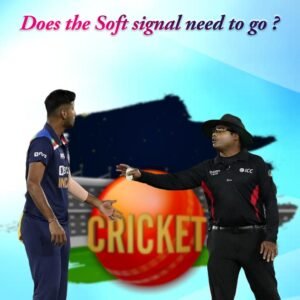 #1Virat Kohli comments on the rule:

These kinds of decisions can change the course of the match, especially in this big game. Today, we were on the receiving end. Tomorrow, it could be another team. Keep the game always simple. There was an instance in the test series when Ajinkya Rahane caught the ball and was not sure. When there are a half and half effort, the soft-signal becomes more important. I don’t know why there can’t there be an I don’t know call for the umpires. You want these things ironed out to keep the game linear. But, we want clarity on the field.

#2 Aakash Chopra comments on the rule:

Time to take a hard call on the soft signal. The moment it is outside the circle, it should be outside the purview of the on-field umpire. It is unfair to blame the umpires. It is the rule that needs changing.

#3 Harsha Bhogle comments on the rule:

The reason an umpire has to give a soft signal is documented,” noted commentator Harsha Bhogle explained on his Twitter page. “On the replays, even clean catches look not out because it is a 2D image of a 3D event. Hence, umpires look at whether the fingers are under the ball. It is a grey area but tech has no answer for now. Need 3D cameras?”

#4 Parthiv Patel comments on the rule:

Parthiv Patel said the soft signal rule should be done away with and the third umpire should be the only one taking a call on the appeals which are referred to him. I don’t think cricket needs a soft signal. You have got to be straightforward. Either it’s out or not out. If you are not sure, go to the third umpire and tell ‘you make your own decision’. ‘We have not seen it, you make your own decision’. That was the case before.

#5 VVS Laxman comments on the rule:

How can this be out? When you are not sure whether the ball was taken cleanly after watching so many replays using top-class technology and still go by the soft signal given by the on-field umpire. I think this rule needs to be revisited and changed.

Virat Kohli got angry by the fact that the on-field umpire had given the soft signal as ‘dismissed’ even when the fielder who supposedly took the catch wasn’t sure himself whether the catch was legit or not. He presented these views of his after the match. However, India went on to win the match.