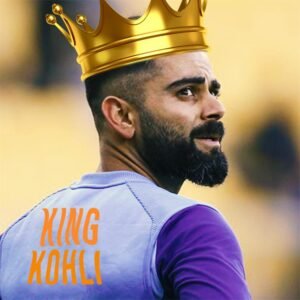 Why Virat Kohli is known as King Kohli? There is no doubt that India is a fortunate country when it comes to having marvelous batsmen. Virat Kohli has acquired himself the title king of cricket with his outstanding performances and passion for the game.

In 2008, Virat Kohli made his debut in International Cricket and since then he broke several records. Within 12 years of his batting career, he has made millions of fans. Kohli has always remained in the spotlight. Due to his dire desire to win every match, as well as his positive aggressive attitude, which is also reflected in his captaincy. 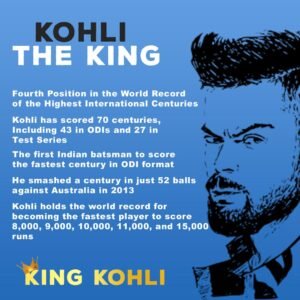 Virat Kohli has maintained consistency in his performance, having an average of above 50 in all the cricket formats. That is the reason people call him a ‘Run Machine.’ Apart from that, he is renowned as ‘King Kohli’ as he has proven himself the number one in modern-day cricket. For Kohli, it’s the numbers that do the talking.

Kohli holds the fourth position in the world record of the highest international centuries. In his international career till now, he has scored 70 centuries, including 43 in ODIs and 27 in Test Series. The first Indian batsman to score the fastest century in ODI format. He smashed a century in just 52 balls against Australia in 2013.

Kohli holds the world record for becoming the fastest player to score 8,000, 9,000, 10,000, 11,000, and 15,000 runs. He even holds the title for being the first Indian cricketer to have 3 consecutive centuries in ODIs. Virat Kohli even broke the record of Sachin and Sehwag of having six double centuries in Test Match. Till now, he has 7 double centuries in this format. Kohli didn’t even lag behind in T20 International Cricket; he is the fastest player to score 2000 runs among others.

Kohli has been breaking records with ease and surely, he is the most composed and elegant batsman in the history of cricket. That is why Virat Kohli is known as King Kohli.

Who is called King of Cricket?

Who is King Kohli?

When was King Kohli born?

What is the birthplace of King Kohli?

What is the height of King Kohli?

What is the batting style of King Kohli?

What is the nickname of King Kohli?

Who is King Kohli’s wife?