Born on 19th September 1977, Aakash Chopra was a batsman who represented the Indian national team in the test format from 2003 to 2004 in a short-lived career. He was a right-handed batsman who hailed from Agra, Uttar Pradesh.

As of now, he also has a famous YouTube channel with more than 2.4 million subscribers. His most popular video has two and a half million views. His cricketing career began with Sonnet Club in Delhi. While his international career was short-lived, he did play a large number of domestic cricket matches.

In this section, we will talk about his domestic career. He used to play domestic cricket for the Delhi cricket team.

He played a total of 162 first-class matches for Delhi in which he scored more than ten thousand runs. His average in this format is also impressive and stands at 45.35. The highest score that he ever made is 301* runs. As for the number of half-centuries and centuries, then they stand at 53 and 29 respectively.

His List A career was again somewhat short-lived as he played just 65 matches. Here too, he managed to maintain an impressive average of 44.72 runs per innings. However, here his highest score stands at 130* runs. He scored almost 2500 runs (2415 runs to be exact) in his List A career. He also made 7 centuries and 17 half-centuries. 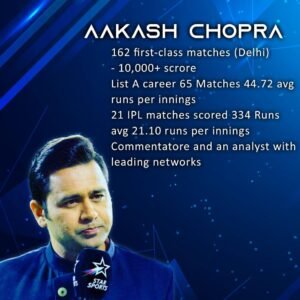 He in total played 10 tests in which he scored 437 runs with an average of just 23 runs per innings. His topmost score stands at 60 runs and he also scored a couple of half-centuries. He also has 15 catches to his credit. Overall, not that great of a test career.

As for the match, India won the toss and decided to bat first. The Indian batsmen in total scored 500 runs before declaring their innings. Rahul Dravid (222 runs) and skipper Sourav Ganguly (100* runs) were the top scorers for the team.

England then responded by making 340 runs in which Nathan Astle hit a century. India’s second innings was declared by them after making 209 runs and setting a target of 370 runs for the Kiwis. Here too Dravid hit a half-century. The Kiwis made 272 runs before time ran out and the match was drawn.

The last test of his career began on 26th October 2004 in Nagpur against the Australian cricket team. In his first inning, he was able to score just 9 runs off 42 balls. While in his second inning, he made just a single run. In both these innings of his, he was dismissed by Jason Gillespie.

In total, he played 21 IPL matches and scored 334 runs with an average of 21.10 runs per innings. His top score stands at 50* which was also his only IPL half-century. He played for the Kolkata Knight Riders in the 2008 and 2009 seasons and was also picked by RR for the 2011 season.

He did play in the debut season of the IPL for the Kolkata Knight Riders. Aakash made his debut on 8th May 2008 against the Royal Challengers Bangalore in Eden Gardens in Kolkata. He managed to make just a couple of runs and was sent back by Dale Steyn.

The toss was won by the KKR and they decided to bat first. They made 129 runs in a match which was reduced to each team being given 16 overs to bat. Dale Steyn was the most successful RCB bowler as he took 3 wickets to his credit.

RCB in response managed to make just 124 runs and was defeated by 5 runs. Mark Boucher (50 runs) and Cameron White (30 runs) were the high scorers who managed to put up some fight. Surprisingly, Sourav Ganguly was the most economical bowler from the KKR side.

While he was a part of the RR squad in 2011, he wasn’t allowed to play a match in that season. He played his last IPL match while playing for KKR in the 2009 season. It was 19th April 2009 when he played against the Deccan Chargers. While batting, he was able to make just 11 runs.

He retired from international cricket in the year 2004 after playing his final test against the Australian cricket team. Incidentally, while people might wonder how he has managed to secure a spot amongst cricket commentators and YouTubers, he is one of the few Indian players who have scored more than eight thousand first-class cricket runs.

Besides Delhi, he also represented Rajasthan and was also a part of the squad which won the Ranji Trophy for the Rajasthan team. His performance became an issue and hence, his international career ended in just a year. But as of now, he has made a name for himself as a commentator.

The reason behind the BCCI dropping him from test cricket was his poor performance and the board finding a better replacement of him in the form of Gautam Gambhir.

Wasim Jaffer was another player who started to emerge as yet another alternative.  He was never considered for the ODI format of the game again because him being unable to perform well in test cricket in terms of his score.

As of now, he is signed by leading networks like ESPN, Sony, and Star Sports for being a commentator and an analyst. In the past, he was also associated with the 7 networks for a similar purpose. And his commentary isn’t just limited to actual matches, he has also signed deals in the past with video game creators for the usage of his voice as a commentator in the games.

While most of the other Indian commentators have secured their positions because of their prolific international careers, Chopra is one of the few who managed to make it big because of their well-renowned domestic career.