Born on 19th February 1996, Prasidh Krishna hails from Bangalore, Karnataka. He is a right-handed bowler who plays for the Karnataka cricket team in domestic cricket. He made his first-class debut against Bangladesh A in 2015 and List A debut in the Vijay Hazare Trophy (2016-2017). As for his T20 debut, he made it in the 2017-2018 Syed Mushtaq Ali Trophy.

In just 9 first-class matches; he has managed to take 34 wickets with his best bowling performance being 5/49. He has also managed to take a couple of catches in them. As for the number of times he took 5 wickets in an innings, it is just one for now.

He has played almost 50 List A matches (49 to be exact). In them, he has taken 85 wickets while 5 wickets in an innings a couple of times. His best List A performance is 6/33 and he has also assisted to dismiss 13 batsmen by taking catches. 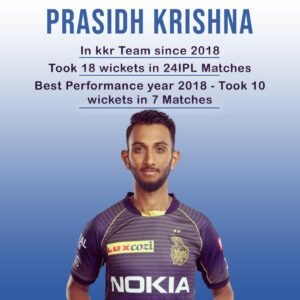 While he made his ODI debut in March 2021, he is yet to play in the test and T20I formats. Hopefully, he will soon.

His ODI debut happened on 23rd March 2021 against the touring English team in Pune, Maharashtra. It was almost a dream debut for him as he took 4 wickets including important ones like that of Jason Roy and Ben Stokes. He played an important role in India’s win in this match.

Ben Stokes took 3 wickets and was the most successful bowler. The English team was all dismissed in just 42.1 overs at the score of 251 runs and Jonny Bairstow was the top scorer (94 runs in 66 balls).

He made his IPL debut on 6th May 2018 against the Mumbai Indians. In his debut IPL match, he didn’t manage to take a wicket and also was quite expensive in terms of economy rate (9.80 runs per over). But this shouldn’t be taken as that he was the most expensive bowler (it was Piyush Chawla).

KKR had won the toss and decided to bowl first. Mumbai Indians made a strong score of 181 runs with the valuable contributions of Suryakumar Yadav (59 runs in 39 balls), Evin Lewis (43 runs in 28 balls) and Hardik Pandya (35 runs in 20 balls).

KKR in response only were able to score 168 runs and hence, lost the match to MI. Their high scorers were Robin Uthappa (54 runs in 35 balls), Dinesh Karthik (36 runs in 26 balls) and Nitish Rana (31 runs in 27 balls). Overall, not a debut that anyone aims for.

He has been a part of the Kolkata Knight Riders squad since 2018. In the 24 IPL matches that he has played, he has dismissed 18 batsmen as a bowler. His best IPL season by performance was 2018 one in which he played 7 matches and took 10 wickets.

His Instagram handles (@skiddyy) is verified and has 57.7 K followers while his Twitter handles (@prasidh43) has almost 19 K followers.

He is also quite tall and stands at about 6 feet and 2 inches.