Who is the Amitabh Bachchan Of Cricket?

Aakash Chopra is the Amitabh Bachchan of cricket. He is perhaps the most known today for his YouTube channel (cricketaakash) and commentary. Needless to say, even after retiring, he is contributing a lot to cricket as a sport. But he does have an impressive voice.

No, we are not claiming that his voice is as impressive as Big B. But after all, his fan following is enormous and he has about two and half million subscribers on YouTube and amazingly, has over 3.3 million followers on social networking site, Twitter. 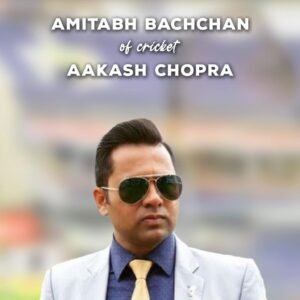 If you have heard Amitabh Bachchan’s voice, you would have found out that it stands apart. The same is the deal with Chopra in cricket. And guess what, he has even voiced a video game too! Besides, there is another thing that makes him comparable with Amitabh Bachchan, and that is their struggles to become what they are today.

While his international career only involved him playing just 10 test matches, Aakash still made it big as a commentator and YouTuber thanks to his hard work and dedication. However, he did have a prolific domestic cricket career though.

Big B’s struggles were even greater. When at a young age he applied for a job at All-India Radio, he was rejected because of the very voice that he is famous for today.

Besides rejections, he also once faced a severe injury while filming Coolie because of which he suffered a lot later. Besides, his financial troubles too affected him greatly at one point in time.

While both of them faced many difficulties, they made a name for themselves because of their hard work. Their voices are cherished by their fans and they have done a lot for the fields that they are involved in.