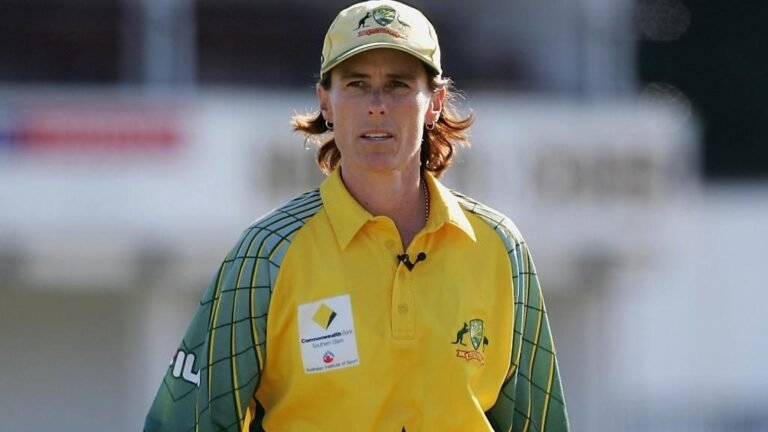 Belinda Jane Clark is an Australian former right-hand batswoman cricketer, and her hometown is in Newcastle, New South Australia. Her mother was a tennis player. Belinda Clark  has played international cricket for the Australian team for a very long period. Miss Clark took the Australian team to new heights with his captaincy.

Clark is one of the most successful players in the Australian team. She scored a double century in an ODI against Denmark, which is her cricket career’s best achievement. Belinda Clark has been honoured with many awards like the Australian Sports Medal, Centenary Medal, and many more. Clark is also one of the youngest players to score a century.

Belinda Clark played her first ODI match on 17 January 19991 against New Zealand. She also owns the highest career batting average of (47.49) in Women’s One-Day Internationals. Belinda Clark is a right-hand batswoman and right-arm off-break bowler and has created many glorious moments for her team.

She also holds the record of scoring 919 runs in 15 matches, and she is well known for her doubleton, which she had scored against Denmark in 1997. Even Sachin Tendulkar took more than a decade to break this record. Clark has an extraordinary cricket career. She is one of the oldest captains of the Australian team.

She has played 188 matches in ODIs for her team and scored 4844 runs with the batting average of 47.49 with five hundred and thirty half-centuries.

Belinda took the women’s division of the Australian team on another level when she scored a double hundred. When she captained the Australian women’s team, the winning ratio was 80% for more than ten years. Now, Belinda Clark trains young girls and helps them to build confidence and develop their skills in cricket.

Belinda Clark is a terrific Australian cricketer. She debuted in ODIs on 17 January 1991 against New Zealand. She is one of the most successful cricketers in the cricket world. She holds the record of crossing the mark of 200 in an ODI against Denmark in Mumbai. She also holds the record of playing the most matches as a captain for the Australian Women’s Cricket team.  Her overall cricket career has been fantastic.

Belinda Clark scored 229 runs in just 155 bowls in a Women’s World Cup match against Denmark on 16 December 1997. She was unbeatable throughout the innings with a strike rate of 147.74 and helped her team in setting the target of a total of 412 runs. Miss Clark managed to secure the victory by a massive number of 363 runs by beating the European team.

Clark was the first woman to achieve the milestone of 200+ runs in an ODI. Clark shocked everyone by her terrifying innings of 229 runs, and this was the most significant achievement of Belinda Clark in her overall career. She made her 200+ innings more elegant with 22 boundaries. Belinda is the only player to score double a hundred in the 1900s.  This was the turning point of Belinda’s career.

She always gave her best on the field and was one of the hard-working players. Miss Clark has set an example that nothing is impossible with her double hundred if you dare to do that work with your full dedication. She is also an inspiration for many young players. In 1998 Belinda Clark was also named Wisden Australia Cricketer of the year. She played for the Australian cricket team from 1991 to 2005. Belinda Clark is also known as one of the greatest female cricketers ever in history.

Belinda Jane Clark, born on 10 September 1970 is one of the best cricketers we could ever have. She has accomplished numerous glorious records in her overall career.  Clark is best known for the double century she made against Denmark in 1997 in Mumbai.

Not even a single man or woman in cricket could break her double century record in the 1900s. Belinda has played the most number of matches as captain in the Women’s Cricket World Cup. Her mother is also linked with a sports background, and she also encouraged Belinda Clark to be a cricketer.

Belinda Clark announced her retirement on 16 September 2005 from all formats of cricket. She bid adieu after having a remarkable career in cricket. And, further, she prepared herself to become the Manager of Commonwealth Bank Centre of Excellence, situated in Brisbane, Australia. Clark played her last ODI against England on 1 September 2005.

Clark played 118 matches and scored a total of 4844 runs in ODIs with a batting average of 47.49. Belinda has scored many centuries throughout her career and always troubled her opponent team with her experience and skills.

Miss Clark has always encouraged her teammates, showed them the right path in her captaincy and snatched victory from the opponent team many times.  She played her last test match on 24 August 2005 against England. Clark has played 15 test matches and scored 919 runs with a batting average of 45.95.

Belinda Clark has played many match-winning knocks for her team, including many centuries and half-centuries. Belinda stated in an interview that she is very excited about the new phase of her life. She has earned fame and enormous respect in the cricket era. Clark has created many historic moments in cricket and achieved many feats in the cricket world.

Belinda Jane Clark is an Australian right-handed batswoman and former captain of Australia’s women’s team. She has been a part of international cricket from 1991 to 2005. Miss Clark has left a significant impact on the women’s cricket division. Clark captained the women’s cricket team from the year 1994 to her retirement till 2005, which is quite an extended period.

She has also been awarded Wisden Australia Cricketer of the year in 1998. She also captained Australian Women’s team in test cricket. The most significant record of her career was when Clark scored a double hundred against Denmark in Mumbai. Then, Belinda became the only player to cross the 200+ mark in an ODI in the 1900s. She scored 229 runs in just 155 deliveries.

Belinda holds the record of playing the most number of matches as a Captain for any team. Clark scored a century in her test match debut, and she has played 15 test matches in which she scored 919 runs. Belinda holds many records in different formats of cricket. Under her captaincy, Australian Women’s team touched new heights of success. Belinda Clark has maintained her legacy in the cricket world. Her achievement and records in the cricket world are worth appreciable.

Belinda Clark’s marital status is single. She is not dating anyone, nor the phenomenal sportswoman married to anyone. She also doesn’t like to share about her personal life in public and she always tries to keep it private.