While in the earlier days of cricket, the dimensions, weight, and materials allowed for making a cricket bat weren’t fixed and hence, people did a lot of bizarre things including using an aluminum bat (Dennis Lillee in December 1979). Nevertheless today, everything is regulated when it comes to these parameters and if you are aiming to make it into the playing 11 of your country as a batsman, it is important to understand how to identify grains in a cricket bat.

What Are Grains In Bat?

Grains in a cricket bat get developed as the wood (willow mostly) ages and sometimes they are also induced via hammering (many of you may know this if you have seen those videos).

The reason? To ensure more grains appear and the bat gets to its maximum possible potential. If you take a just manufactured bat and try to face a delivery from a pacer, your bat is going to break. It’s that simple.

Is It Better To Have More Or Less Grains On A Cricket Bat?

If the grains are more natural, this simply implies that the tree from which the wood was taken grew gradually. While bats with a greater number of grains may perform well early on in their life.

But then there is a trade-off as these bats may have a short life span. Things like this need to be kept in mind in case you are on a budget and need a bat only for a local tournament. 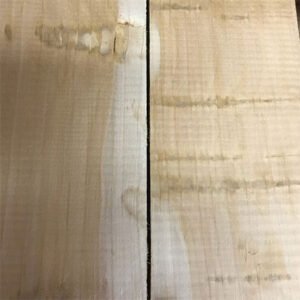 It does seem that seems that English willow is better because it has a greater number of grains but that is just a correlation and not a causation. There might be other factors involved too since the materials originate from different species of trees.

What Type Of Willow Bat should I buy In India?

Choosing cricket bats in India is quite a simple task when it comes to deciding the type of willow. If there no such limitation on budget and you don’t have an issue with what you are going to spend, then by all means go with an English willow cricket bat.

While if you wish to ensure you only buy what you need, then if you are playing district level or inter-school cricket, go with Kashmir willow. For those players aspiring to be part of big domestic and international level tournaments, it is better if you go with English cricket bat willow.

Will Willow Type Choice Change My Performance As A Batsman?

Those who follow cricket and any given cricketer closely know that skills matter a lot in cricket with technique. Cricket as a game has far too many dimensions than just willow type for a batsman.