Kartik Tyagi is a young bowler who was born on 8th November 2000 in Hapur. He rose to prominence when he started playing for Rajasthan Royals in 2020. While he is yet to represent India, he was named as one of the additional bowlers for India’s 2020-21 tour of Australia.

He has played a couple of matches and has managed to take 3 wickets with an economy rate of 2.78.

In his List A format too, he has performed decently by playing 7 matches and taking 10 wickets. What is interesting here is that he managed to maintain a decent economy of 5.67 runs per over. 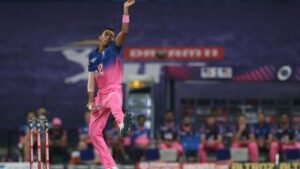 Kartik’s IPL debut happened on 6th October 2020 in Abu Dhabi against Mumbai Indians. He took one wicket and that too of the opener Quinton de Kock. However, his economic rate was somewhat higher at 9 runs per over.

As for the match, MI had won the toss and decided to bat. They went on to create a strong total of 193 runs thanks to Suryakumar Yadav’s 79* runs. In response, RR got all-out at the score of 136 runs with interestingly Tyagi staying not out without facing a ball. It was a decent IPL debut for him but nevertheless, his team lost.

He bowls at a speed of around 140 Kmph. His bowling style is being said to have similar to that of Brett Lee in terms of run-up and Ishant Sharma when it comes to the actual delivery. He is quite young and is yet to reach his full potential.

Where is Kartik Tyagi from?

He hails from Hapur, a city which is also the main city of Hapur district in western Uttar Pradesh. It is less than 100 kilometres away from the national capital, Delhi.

What is the height of Kartik Tyagi?

Kartik Tyagi is 6 feet tall and as a right-hand medium-fast bowler, this does give him an advantage while bowling.