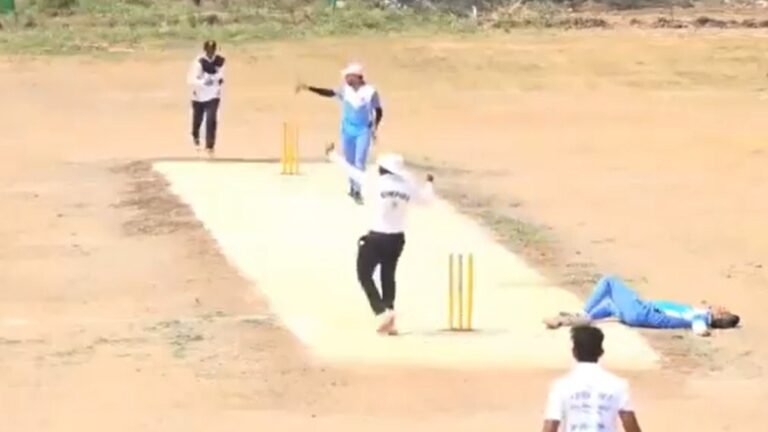 An unfortunate incident happened in the Pune district of Maharashtra. Where a man dies after collapsing at non striker end. Babu Nalwade, a cricketer playing in a local cricket competition in Jadhav Vadi, Junnar was standing on the non-striker’s end when he suddenly collapsed. While he was supposedly well before he collapsed, many including the medical team believe the cause of the death to be a heart attack. Nalwade was 47 years old. While he might have been a local player, it is a case of deep sorrow every time that someone dies playing cricket.

Though this wasn’t the result of lack of equipment, there might be some possible things which may have caused it. Nalwade was 47 and hence, he may have had some artery blockage which could have caused the heart attack.

Someone recorded this as well and it was shared by a local media outlet, Sakal, who tweeted it on their Twitter account. The video shows that the bowler bowled a delivery after which Babu tried to take a single.

When he did not do that, he came back to the non-striker’s end again. Then he kneeled as if he was feeling some discomfort after which he simply collapsed on the ground. It was quite a tragic scene on the ground.

While people may have thought that he may have become unconscious due to dehydration, little did they know that he had passed away.

Since he didn’t get conscious after trying, people took him to the local hospital. Where doctors declared him to be dead. This again tells us that having medical professionals even in local matches is important. Since accidents like these can happen anytime.

We hope that the deceased soul gets peace and the family of Late Babu gets the strength to overcome this tragedy.