Rajasthan Royals is a prominent franchise team of the Indian Premier League. The team led its first step in the arena of the IPL in 2008 when the concept of IPL just formulated its roots. This team represents the pink city of Rajasthan that is Jaipur. Sawai Mansingh Stadium is the home playground of the team. The team has performed very well in the IPL arena since the time it set its foundation. 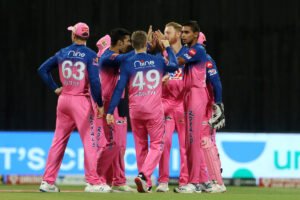 Manoj Badale and Lachlan Murdoch own the team. Earlier, Bollywood sensation Shilpa Shetty and her husband Raj Kundra were owners of the team, but later they gave up their ownership rights. Sanju Samson, prominently known as Kerala star, is currently the captain of the team. Before Sanju, Australian cricketer Steve Smith was the captain of the team. Other eminent players who are part of this fantastic team include- Jofra Archer, Ajinkya Rahane, Chris Morris, Ben Stokes, etc.

One of the most spectacular achievements of Rajasthan Royals is that the team was runner up in Champions League Trophy Twenty20 2013. The team has once been under the guidance and captainship of the legend player Rahul Dravid. Ajinkya Rahane is considered the best-far player on the team. Rahane has also set a milestone of 3098 runs playing for the team. A bad implication is also linked with the Rajasthan Royals as the team was kicked out of IPL avenue for two years in a betting scandal along with Chennai Super Kings in 2015.

The team won the hearts of people post-ban all over again with its sensational performances. The terrific team bagged the Rajasthan Royals title in 2008, beating all its opponents. Rajasthan Royals owns a sound and fantastic fanbase. The excellent team, incredible players, and zealous fans make this team one of the most successful and in-demand teams of the IPL realm.