Royal Challengers Bangalore is an outstanding team of the Indian Premier League. This team basically represents Bangalore, Karnataka. RCB laid its foundation in 2008 by United Spirits. Royal Challengers Bangalore inherits its name from a famous liquor brand- Royal Challenge. M. Chinnaswamy Stadium is the home stadium for this team. Vijay Mallya was the previous owner of this terrific team. When the IPL was introduced in India in 2007, then the advent of this phenomenal team took place. Chennai Super Kings and Mumbai Indians are regarded as the superior team of the IPL time. But, RCB’s charisma is quite enchanting too. 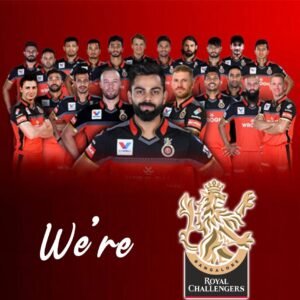 The best part about Royal Challengers Bangalore is that it has the most exciting players in its lap. Virat Kohli, AB de Villiers, Daniel Sams, Glenn Maxwell, Mohammad Siraj, Yuzvendra Chahal are prominent members of this team. The presence of Virat Kohli and AB de Villiers bolsters the eminence of RCB to whole new folds. RCB is one of the most entertaining teams on the IPL horizon. It presents its audience with a pack of entertainment and sportsmanship.

Simon Katich is the head coach of the team. He leads the team with the utmost dedication and precision. Virat is the captain of this team which enhances the team’s prospects to a whole new extent. Royal Challengers Bangalore has completed 12 years in the IPL regime, and since then, there seems to be no going back for this team. The most exciting part about Royal Challengers Bangalore is that the team has never won any IPL title, but this team’s fan base has never gone down. RCB has made it to the IPL final thrice but couldn’t win. RCB has a massive fan following despite not holding any IPL title. The team is doing exceptionally well in the arena of IPL.