While many of us have seen those cringe memes that go viral on Twitter and Instagram after Virat Kohli gets dismissed without scoring a run but those who follow cricket regularly know this for a fact that he is someone who is perhaps the best Indian batsmen that we have today in the Indian cricket team. He is one of the best batsmen in the world. When he gets going, it looks like that no one can get him out. He played elegant cricketing shots. The consistency he has maintained in the past few years is up to the next level. That is why Virat Kohli is known as a run machine. 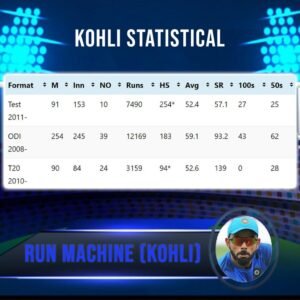 If you see the average column, then you will notice that he has managed to keep his average above 50 runs per innings in every format of international cricket. What is surprising is that he has been able to do this also in the T20I format.

Another observation that you can make is that while his average in T20I format is above 50, the number of half-centuries stands at just 28 out of 84 innings. This conveys to us that once he crosses the 50-run mark, he goes on to play a big inning ahead.

You can also notice that he has managed to hit a considerable number of centuries in ODI cricket too (43) and he is just behind Sachin Tendulkar (49) internationally. He is performing in all the formats. With an average of 50 plus that is why Virat Kohli is known as a run machine.

What Lies In Future?

As of now, Kohli is 32 years old and he is quite fit. So, maybe he will continue to play for a few more years than other players.

The question that most fans have is whether he will break records that are currently held by Sachin. Well, only time will tell about that but one thing to note is that Sachin made his debut at a very young age (16) as compared to King Kohli. And hence, he had a lot of time to keep playing.