Cricketfile Cricket-The Dream Sport
Home How-to How To Read A Bowling Scorecard in cricket? I Cricketfile So, this is the bowling scorecard of the Indian bowlers from the final match of the 2011 cricket World Cup against Sri Lanka. As you can see, concerning statistics, there are five main columns. Allow us to explain them in detail. So that you can understand how to read a bowling scorecard in cricket.

So, this is the bowling scorecard of the Indian bowlers from the final match of the 2011 cricket World Cup against Sri Lanka. As you can see, concerning statistics, there are five main columns. Allow us to explain them in detail. 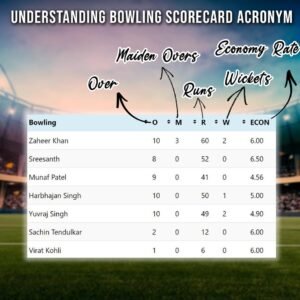 An over in cricket consists of 6 balls (deliveries). The overs columns tell us about how many of them have been bowled in total.

It isn’t necessary that every value in this column be a whole number as the innings of the batting team can end in between overs too. Also, in special circumstances, a bowler can get injured and may have to retire too before completing his over.

This column keeps track of how many of all the overs were those in which no run was scored at all. This gives further clarity about the bowler’s performance as bowling more maiden overs tells us that the bowler can stop the flow of runs.

This is the total number of runs that the bowler has given out. While they by themselves don’t tell us much about the bowler’s performance, given how many overs he has bowled, we can calculate a bowler’s economy rate that we will discuss next.

This gives an overall idea about how ‘economical’ a bowler is. The way it is calculated is that it is an average of the number of runs that the bowler has given away on an average. Concerning the screenshot given above, take, for instance, Harbhajan Singh.

The single most important performance factor of a bowler. The wickets column tells us about how many batsmen did the bowler manage to dismiss. However, batsmen who have been dismissed because of runout aren’t counted.

While the terms we mentioned above can be helpful while you are reading statistics of the match after it has happened, there are some other details and terms that you should know about.

Yes, in live telecasts you can find out what is happening on each bowl too. While numbers mean the number of runs scored on that ball, there are some other terms too that you should know.

The W as you know stands for a wicket that is taken on that ball.

NB is for no-ball which can happen if the bowler oversteps the line while bowling or bowls a ball above the waist level.

No, this doesn’t mean a wicket but rather a wide ball.

This is the bye symbol that signifies that the runs scored haven’t been a result of the ball touching the batsman’s bat.