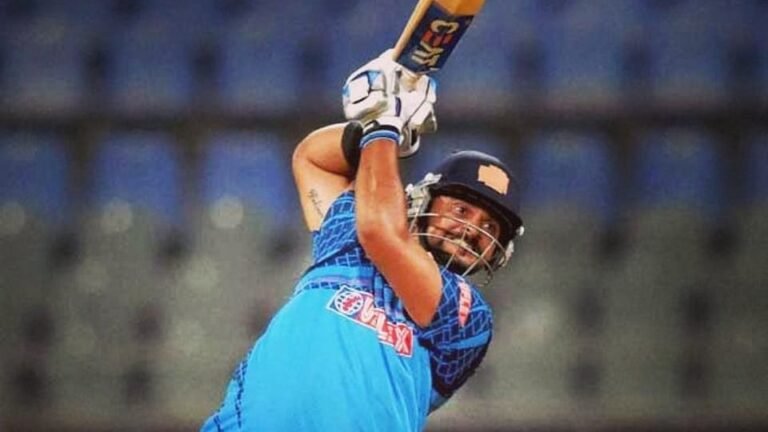 A left-handed batsman, he plays for the Uttar Pradesh cricket team in domestic first-class cricket. Suresh Raina is considered to be one of the best fielders which the world has witnessed in international cricket. At one time, he used to captain the Gujarat Lions team in the IPL. As of now in the IPL, he plays for Chennai Super Kings. Interestingly, he has also served as the captain of the Indian cricket team. If we talked about his international cricket debut, it happened on 30th July 2005 against the Sri Lankan cricket team.

Born on 27th November 1986, Raina was just 19 years old at that point of time. He had to wait for five long years before being included in the Indian cricket team‘s Test squad and then finally on 26th July 2010, and he made his debut again against Sri Lanka.

He announced his retirement from all forms of international cricket on the occasion of Independence Day in 2020. Although he was supposed to play the 2020 edition of the Indian Premier League, he could not play because of some personal issues. If we talk about Raina’s ethnicity, he is a Kashmiri Pandit originally hailing from Rainawari, Srinagar. He started playing cricket at the age of just 14.

In his international career, Raina managed to play 18 Tests, 226 ODIs and 78 T20I matches. He is also one of the few Indian cricketers who have scored a century in their debut test match.

As for his personal life, he is currently married to Priyanka Chaudhary. He is also a proud dad to a son and a daughter. Hopefully, we will watch him playing cricket in IPL 2021.

Suresh Raina made his test debut on 26th July 2010 against the Sri Lankan cricket team. The match was held in Colombo. Sri Lanka won the toss and decided to bat first. Thanks to the excellent performance of Mahela Jayawardene (174 runs), Kumar Sangakkara (219 runs) and Tharanga Paranavitana (100 runs), the Lankan team managed to score a massive score of 642 runs for four wickets (declared).

In response to the Sri Lankan innings, India managed to put up an even massive score of 707 runs! This was due to Suresh Raina (120 runs), Master Blaster Sachin Tendulkar (203 runs) and Virender Sehwag (99 runs). In particular, Raina performed remarkably well given that this was his debut test match and his first-ever innings in test cricket.

He smashed 12 fours and two sixes in his beautiful innings. Sri Lanka in its second innings meanwhile managed to score 129 runs before the end of the match.

As you might be knowing, Suresh Raina made his ODI debut against the Sri Lankan cricket team on 30th July 2005. Unfortunately for Raina, he just got out on the first bowl itself by legendary bowler Muttiah Muralitharan.

As for bowling, he could bowl just two balls in which he gave away four runs in total. As for the match, it was being held in Dambulla. India had won the toss and had elected to bat first. India managed to put up an overall total of 205 runs. The top scorer was skipper Rahul Dravid who scored 54 runs. He smashed six boundaries in his innings.

Venugopal Rao also contributed 38 runs. As for the Lankan bowling, spin legend Muttiah Muralitharan was the best bowler who managed to take three wickets in total. While chasing the set target, Sri Lanka achieved to do so in just 48.2 overs.

Suresh Raina made his T20 International debut against the South African cricket team on 1st of December 2006. He managed to score three runs in this match and stayed not out until the game.

The match was being held in Johannesburg, South Africa. The South African cricket team had won the toss and had decided to bat first. They managed to score a decent total of 126 runs. Their top scorer was Albie Morkel (27 runs). He made these many runs in just 18 balls while smashing 1 four and three sixes.

As for the Indian cricket team, they chased the target while just one ball was remaining. It was all thanks to the excellent performance of Dinesh Mongia (38 runs), Virender Sehwag (34 runs) and Dinesh Karthik (31 runs). Karthik was also declared to the man of the match for his excellent batting.

Suresh Raina made his IPL debut on 19th April 2008 in Chandigarh against Kings XI Punjab. He played very well as he scored 32 runs in just 13 deliveries smashing two fours and three sixes.

If we talk about the match, then Chennai Super Kings had won the toss and had decided to bat first. Their decision seems to be a correct one as they were able to score a humungous score of 240 runs. The top scorers were Michael Hussy (116 runs), Suresh Raina (32 runs) and S Badrinath (31 runs).

While Irfan Pathan was the best bowler from Punjab’s side who took two wickets, as for the Kings XI Punjab team’s chase, they put up a great fight and managed to score 207 runs. Their top scorers were James Hope (71 runs) and Kumar Sangakkara (54 runs). Raina till date plays for the Chennai Super Kings.

Suresh Raina played his last international game on 17th July 2018 against the England cricket team. Raina did not manage to score much and was sent back to the dugout after scoring one.

England won the toss and had decided to bowl first. India was able to put up a decent score of 256 runs. The main contributors were skipper Virat Kohli (71 runs) and MS Dhoni (42 runs).

As for the English bowlers, David Willey and Adil Rashid managed to take three wickets each. While chasing the set target, England managed to do that in just 44.3 overs. Their best-performing batsmen were Joe Root (100* runs) and skipper Eoin Morgan (88* runs).

Only Shardul Thakur managed to take a wicket amongst the Indian bowlers. Suresh Raina could have done better in his last international match. If he had done that, India could have won the game.

He conveyed this to his fans via the social networking site Instagram. The reasoning which he gave for retiring on 15th August is quite impressive. As per him, his jersey number is three and Dhoni’s was 7. And coincidentally, India was celebrating 73rd Independence Day last year.

Although the reasoning might sound great, but we think things might have been given a better turn. They could have said that they were retiring on 15th August 2020 due to the huge which respect which they have for our country. But yet they decided to go with the logic relating the date with their ‘jersey numbers’. Anyway, history will remember him as a great cricketer.