Most people love it when batsmen play huge hits and drives and cricket. While many might not like this, cricket these days has become a batsmen’s game after the advent of T20 cricket. Everyone wants to see those drives, sweeps and reverse sweeps and it’s alright. But if you are new to cricket and are facing trouble while reading the batting scorecard, we will explain to you how to read a batting scorecard in cricket.

How to read a batting scorecard

The first column as you can see has the names of the batsmen who batted but in the second column, information about how the batsman was dismissed is given.

If the batsman stayed not out till the end of the team’s innings, then it is simply noted as ‘not out’ in the second column. As for the last column, the strike rate of the player is stated. Allow us to explain the terms in the next section. 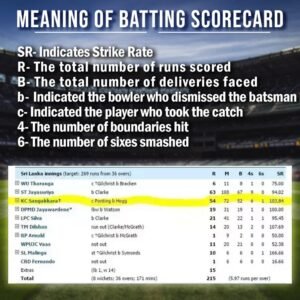 It is calculated by dividing the number of runs scored by the number of balls and then multiplying the resulting value by 100. Let’s take an example from the table above of that of Gautam Gambhir.

You can cross-check the same with the screenshot above.

The total number of runs scored.

The total number of deliveries faced.

Indicated the bowler who dismissed the batsman.

Indicated the player who took the catch.

This indicates that the batsman got runout and the name of the player in the bracket is the one who did it.

The number of boundaries hit.

The number of sixes smashed.

While most of the things stay the same during a live telecast of a cricket match, there is one thing though. Allow us to explain.

You will notice that the batsman’s score will often be displayed like this.

The point to note here is that X is the number of runs scored by the batsman and Y is the deliveries that he has faced. Also, * symbol is usually used after the name to convey which of the two batsmen is on the strike right now.