Shining a ball implies keeping one side of the seam rough and polishing the other one. Pacers mostly do this to achieve swing which can help them take wickets. Still, it is only effective done on a new ball since with time, no matter how hard the bowler tries, both the sides of the seam get roughened up. How To Shine A Cricket Ball? Those of you who follow cricket already know that keeping the ball smooth on one side and rough on the other gives leverage to bowlers in taking wickets. 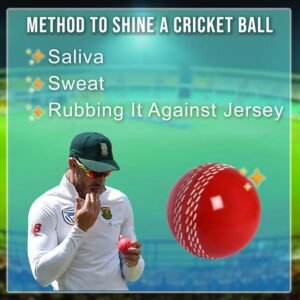 Here are a few methods that can be used to shine a cricket ball.

Why Does Shining The Ball Help The Bowler?

Keeping one side of the ball shining and the other rough makes the airflow around the ball such that the ball moves in the air. This makes it difficult for the batsman on the crease to choose a proper shot. But, in some cases, the ball hits the bat’s edge and the wicketkeeper catches and dismissed the batsman

This is something which you as a cricketer and a bowler need to stay away from. Many well-known cricketers have faced serious action because they were involved in the ball-tampering scandal. Making use of foreign substances or things to polish the ball has been declared illegal by the ICC. And getting involved in doing it isn’t a minor offence.