Thanks to his amazing form, Virat Kohli has again managed to break a world record. This time, it’s a big one. A really big one. Virat Breaks Sachin’s record in a grand way. He breaks Sachin’s Record for Fastest 12000 Runs in ODI Cricket. Sachin Tendulkar took 309 matches to reach this feat. However, Virat Kohli just took 251 matches to do the same. That was amazing.

While the Indian team is struggling to perform in its tour of Australia, Virat Kohli has once again proved his mettle. One thing which his fans are worried about is his centuries. Virat hasn’t managed to score an ODI hundred this year till now. If he fails to knock a hundred in this series, then it will be the first time since 2008 that he did not manage to score even a single ODI hundred in a calendar year. 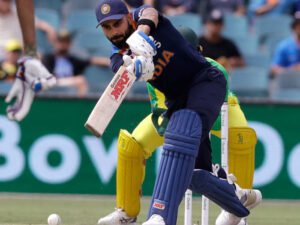 Though things might be looking grim for the Indian team, there is still a chance for them to make a comeback in the Canberra ODI. With regards to Virat, it’s great news for India that he is back in his form. Right now, he is sporting an amazing average of 59.41 runs per innings.

Taking himself towards 12000 ODI runs and that too in 242 innings is a miraculous feat in itself. This only proves that he has worked hard and achieved this achievement through sheer hard work and focus.

We hope he keeps breaking records like these in the upcoming times. As for now, he will be a part of the Indian squad till the first test match. After which he will be returning to India with his wife Anushka Sharma for their child’s birth. The BCCI has already granted him a paternity leave for the same.

Stay connected for all cricket updates.