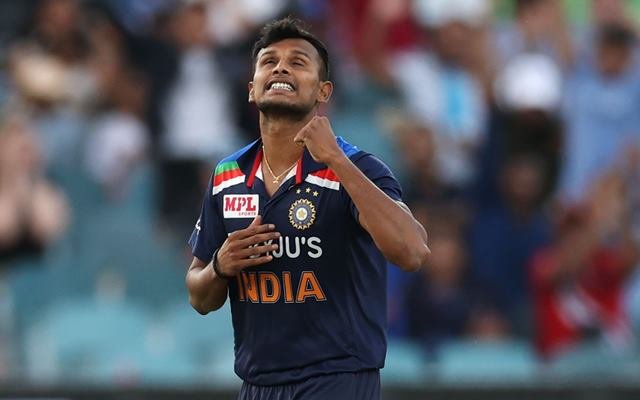 T Natarajan although a newcomer, has managed to make quite an impression on the Indian cricket fans. Thangarasu Natarajan is an Indian cricketer who hails from the state of Tamil Nadu. He made his test debut, ODI debut and T20I debut during India’s tour of Australia in 2020-2021. He has been playing in the IPL (Indian Premier League) since the year 2017. Thangarasu is a medium-pacer who has the potential of becoming a great bowler.

T Natarajan has the ability to control the flow of runs and taking crucial wickets. That has earned him the tag of the “fan favourite”. Hardik Pandya also praised him for his wonderful performance in the last match and even said that it was he who was more deserving of the Man of the Match Award. It was Natarajan who restricts the Australian team to just 194 runs. His ability to bowl yorkers is a great asset to him and the whole of the Indian cricket team. He gave the Australians a taste of their own medicine when he bowled Mitchell Starc on a yorker bowl.

Although he is quite new to international cricket, he has managed to make quite a dent via his stupendous performance. We hope that he continues his performance in the upcoming final match of the T20 series and secures a permanent spot in the Indian squad.

If we talk about the upcoming matches then it will be quite interesting to see Natarajan’s performance in the upcoming games. We hope that as true Indian fans you will keep supporting this young player.

We hope that you liked this article. If you did, then don’t forget to share us with your friends and family. Stay connected with us for more updates related to cricket.

He made his test debut in the final test of the Border Gavaskar Trophy of 2020-2021 at Gabba on 15th of January 2021. In the first innings of the Australians, he managed to take 3 wickets and while in the second innings, he was the most economical bowler of all.

As for the match, Australia had won the match and had decided to bat first. They managed to score 369 runs. Marnus Labuschagne scored a century in this innings. While India countered this score by smashing 336 notches.

They wouldn’t have been able to do this had lower-order batsmen Sundar and Thakur hadn’t scored half-centuries. Natarajan stayed not out in this innings. The Australians in their second innings scored 294 runs thanks to a half-century of Steve Smith and 48 run innings of David Warner. They set a target of 328 for India which the Indians achieved while just 18 balls were left.

He made his ODI debut on 2nd of December 2020 in Manuka Oval against the Australian team. Natarajan took two wickets including the crucial wicket of opener Marnus Labuschagne. While he was also the most uneconomical bowler in this match for India.

As for the match, India had won the toss and had decided to bat first. They managed to put up a decent score of 302 runs. Skipper Virat Kohli (63 runs), Hardik Pandya (92 runs) and Ravindra Jadeja (66 runs) helped them reach there.

None of the Australian bowlers managed to take more than two wickets and Sean Abbott was the most expensive bowler. Australia while chasing the target came quite close but then they lost by 13 runs. Captain Aaron Finch and Glenn Maxwell smashed half-centuries and did their best.

Shardul Thakur was the best Indian bowler as he took 3 wickets and on the other hand, Jasprit Bumrah took 2 wickets while being the most economical bowler.

His T20I debut also happened during India’s tour of Australia last year. It happened in Manuka Oval on 4th of December 2020. He took three wickets out of which two were quite important. They were that of opener D’Arcy Short and Glenn Maxwell.

He did play a big role in helping India win the match as it was quite a close fight. The Australians had won the toss and had decided to field. India scored 161 runs in which the major contribution was that of opener KL Rahul (51 runs) and Ravindra Jadeja (44 runs). Jadeja’s innings were turbocharged with a strike rate of 190+.

Australians in response fell short of the set target of 162 runs by a narrow margin and lost by 11 runs. Y. Chahal and Natarajan were the ones who tilted the match in India’s favour and helped India win. Washington Sundar too increased the pressure by bowling economically.

Natarajan made his IPL debut in the 2017 edition of the league. He used to play for the Kings XI Punjab back then. His first IPL match was against the Rising Pune Supergiant on 8th April 2017. He managed to take one wicket, which was quite crucial as it was of opener Ajinkya Rahane.

As for the match, the Kings had won the toss and had decided to bowl first. They managed to stop RSP at 163 runs. Almost all their bowlers took minimum one wicket except for Mohit Sharma.

Stokes and Manoj Tiwari were the top scorers with 50 and 40 runs each. While chasing, the KXIP managed to chase the target of 164 runs in 19 overs successfully. Skipper Glenn Maxwell (44 runs in 20 balls) and David Miller (30 runs in 27 balls) were the top scorers. Overall, it was a decent debut for Natarajan.

Natarajan is currently married to Pavithra. They were also blessed with a girl child during the last IPL season. His teammates and the team management of Sunrisers Hyderabad had also congratulated them about this. Pavithra like her husband hails from a humble background.

She also has an Instagram account @pavi.shakthi which has around twenty-five thousand followers. There she mostly posts pictures of her husband Thangarasu and herself. Interestingly, Pavithra had to manage and take care of her daughter on her own for quite some time as he was busy with IPL in the UAE and the tour of Australia.

T Natarajan’s net worth is around two million US dollars. A majority of which is thanks to his IPL income. Since he has just joined the Indian squad, he has not yet received any major brand endorsement offer. Hopefully, he will keep performing well and will get some amazing brand deals from big brands.

T Natarajan is an Indian cricketer who made a historical debut for India against the Australian cricket team. His selection in the Indian cricket team was on the basis of IPL which is the most popular league in the world. He performed exceptionally well in the IPL 2020. Due to which, he got the opportunity to play international cricket for India. He made the debut in all the formats of cricket in the same tour. That was unbelievable! He got the opportunity in the side as Indian bowlers were missing out the matches due to injuries. Due to which he got the opportunity to represent India. He shines in all the formats. He has a bright future. His story says that dreams do come true.

What is the full name of T Natarajan?

Who has bowled most yorkers in IPL 2020?

Thangarasu Natarajan has bowled 76 yorkers in IPL 2020. Because of which he got the reputation as a yorker specialist bowler in the league and got selected for the India Tour on the basis of Indian Premier League. While his economy rate in the tournament was 8.02 which is okay when players are looking to smash in every ball. He picked 16 wickets in the IPL 2020 with the best figures of 2/24.

Natarajan Played for which IPL team in IPL season 2020?

He played for Sunrisers Hyderabad in IPL 2020.

When did Natarajan start playing cricket?

He began playing cricket at a very early age and he kept playing with a tennis ball until he was 20. The lack of resources made the situation worse for him. The first official team which he represented was the BSNL team in a local league in the 2010-2011 season.

Is Natarajan a good bowler?

Yes, he is a really great bowler and has proved himself to be quite an asset in the recent Indian tour of Australia. His ability to take wickets when they are most needed and building pressure on the opposite team makes him a great bowler. Hopefully, he will get a chance in the upcoming tours as well.