While many might think that the stadium only hosts cricket matches, it witnesses cultural and musical events too. You would also be surprised to know that while the stadium was commissioned in 1969, its name wasn’t always the one that it has now M Chinnaswamy Stadium.

It used to be called as KSCA (Karnataka State Cricket Association) Stadium before it was renamed after Mangalam Chinnaswamy. Surprisingly, he wasn’t in the favour of renaming the current stadium after him.

Born on 29th March 1900, he was a well-known cricket administrator who was also one of the founding members of the KSCA. The positions of significance held by him were as follows.

By profession, he was a lawyer who practised law from 1925 to 1975. He passed away on 8th November 1991. His contribution to the development of cricket in Karnataka and throughout India will forever be remembered. 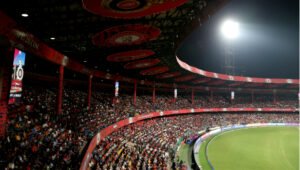 The current capacity of the stadiums stands at about 40,000 which is decent but not as high as the Narendra Modi stadium.

While many stadiums throughout India are owned by the cricket associations themselves, M Chinnaswamy stadium’s owner is the Karnataka Government. But again, the operator still is the KSCA.

Also, another surprising record that was created in this stadium is that it witnessed a tied ODI World Cup match in 2011 when both India and England managed to put up a total of 338 runs each.

First Matches In Each Format at M Chinnaswamy Stadium

Like all stadiums, this one too has its ends. They are;

BEML is named after the Indian PSU known as Bharat Earth Movers Limited. They have their headquarters in the city of Bangalore too.

The stadium has also hosted several domestic and IPL matches as many of you might be knowing.

Unfortunately, the stadium was bombed in April 2010. More than a dozen people were injured but thankfully, no life was lost. Two bombs exploded while a third one was defused. This happened before an IPL match in the stadium.