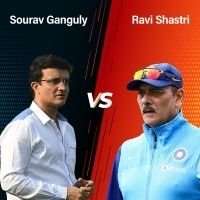 Sourav Ganguly Vs Ravi Shastri side-by-side tabular comparison is a must if you wish to find out how they are similar and different. While it is true that their career doesn’t overlap much in terms of their playing years, but a factual overview of the statistics will bring more clarity.

What Are They as of Now?

While Sourav is the sitting president of the BCCI, Shashtri is currently coaching the Indian team. Under Ganguly’s watch, IPL was conducted in the UAE in 2020 and the team has been performing well too with Shashtri’s efforts as the head coach.

Let’s now proceed with talking about their batting career (international and domestic).

As it can be clearly seen, Ganguly’s ODI career was quite prolific and his batting average too was better than Shastri. Though a point to note here is that Ravi had to retire early at the age of 31 because of a recurring knee injury.

A strange observation about Dada is that he has scored a disproportionate number of the 50s as compared to centuries. This clearly shows that while doing this helped him to maintain his average, this also meant that he wasn’t able to convert these into centuries.

This is where it looks like we might be able to compare them in a just manner. While Dada does beat Ravi Shastri in terms of average but the margin isn’t that much. Since the 50s by Shastri aren’t that much, this does suggest that he didn’t get dismissed way too early on many of his innings. Sourav’s test debut came very late as compared to his ODI debut as you might have noticed as well.

Both played near about the same number of matches and have an almost equal average too. While the difference isn’t there in the total number of centuries as well, it is there in the half-centuries.

They both seem to be those types of batsmen who are carbon copies in terms of performance record in first-class cricket.

Those who have been reading would have noticed that Ganguly’s high score in List A cricket is the same as his ODI one (183). Another similar pattern here is the comparatively greater number of the 50s by Ganguly. Ravi Shastri is far behind Dada when it comes to List A cricket batting stats.

The reason we didn’t compare bowling statistics in the main tables above is that while Ravi Shashtri was an all-rounder, Sourav was mainly a batsman. Nevertheless, here are the stats of both the players as bowlers.

They both were also involved in a feud in which Sourav Ganguly implied that as a coach Shastri wasn’t taking his job seriously. The reason which many cited was that Virat Kohli was being given a free hand and as a result, the discipline of the team was suffering. Nevertheless, things look good as of now as team India won the Border Gavaskar Trophy (2020-21).

Controversies Between Shastri And Ganguly

While many may speculate, who was at fault out of the both but we do have ample information to do an objective analysis. Nevertheless, there are some things that are very clear about all this.

While it is true that he is a well-known former Indian cricketer, getting rejected was something he took personally. If Shastri had been an aspiring cricketer and pulled up a stunt like this, people would have understood that it is possibly out of he or she being immature. The reason he gave for his possible disappointment wasn’t something that made sense either. Ravi knew that he couldn’t say a word against Anil Kumble or his capability as a would-be coach.

So, he picked a soft target whose absence he believed was the real reason for his rejection. What he didn’t try to figure out is that Sourav had to head over to attend something else too and the initial interviews took too much time. Now, there is a chance that he probably knew this but simply wanted to vent out what he felt at someone.

But we can all agree that saying things like Sourav knowingly disrespecting him by doing so was a preposterous statement. And asking Ganguly to be present at such meetings in future was as if a teacher scolding a child for something he didn’t even do deliberately.

Sourav Shows Us Why He Is Called Dada (Pun Intended)

Dada wasn’t deterred or scared by these statements and even indirectly called Shastri a fool. He too gave a befitting reply to Shastri’s by taunting him for being in Bangkok at the time instead of being physically present in the interview.

Though he too escalated things by saying this. Nevertheless, he too chided Shastri for taking these things into the public domain. This was a valid point. If Ravi had any issues, he could have written an email to the BCCI or even talked with Ganguly as there are rarely any rivalries amongst Indian cricketers or former cricketers.

Why Bringing This Into Public Domain Is A Bad Idea?

The thing is the interview was about who was going to be the head coach of the team. We all know how important a process that must be as the team’s performance depends on it. No doubt that Ravi was a great player of his time but he could or should have acknowledged the fact that Anil Kumble was thought by the selectors to be a better choice.

Shastri was thought to be a candidate that was suitable to be interviewed for a job on which the hopes of more than a billion people depend indirectly.

Shastri is what he wanted to be today. The head coach of the Indian cricket team. Yes, it is totally possible that Virat Kohli may have played a role in that. Sourav is the president of the BCCI though. He has also expressed that he has never held anything against Shastri and that is a good thing.

Trolls however are busy spreading conspiracy theories like Shastri drinks a lot and so on. Even if he does, it is his personal choice. We shouldn’t comment anything about what he should do in his personal life.

Hopefully, this Sourav Ganguly vs Ravi Shastri article has helped you in gaining an insight into what their capabilities were as a cricketer. They haven’t stopped contributing to cricket in India as we mentioned above. Hopefully, they will help cricket in India become better with each passing day.

Did Sourav Ganguly bowl as a cricketer?

Yes, he did. In fact, he took several wickets as well in all cricket formats as well.

How Many ODIs did Ganguly play in total?

Why did Ravi Shashtri retire early?

He retired early because of a knee injury.

Was Ravi Shashtri part of the 1983 World Cup Team?